Yesterday, I began my career as a low level archaeology serf. Day 1 was spent in the Isthmia museum basement going through bags of un-inventoried sherds from the earlier excavations of the north and south moles of Kenchreai harbor. This involved finding items in the bags with some sort of value artistic or historical value and photographing them and cataloging them. I don't have pictures of the work day, though I did take pics of the Isthmia museum materials--except the lovely mosaics from Kenchreai, which I will need to shoot tomorrow. I spent Day 2 at the site weeding the grounds of the earlier excavations so that the Director could take photos. The site was an early Christian church and baptistry founded where Paul supposedly visited. Due to some technical difficulties,  I can't upload those photos until I return to the US. But I will show you some of the Isthmia museum shots (Isthmia was the site of a temple of Poseidon and one of the 4 big athletic competitions of the ancient world). 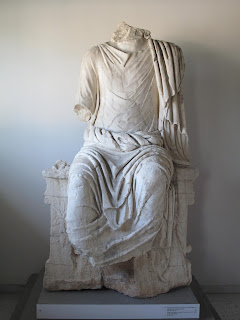 Statue of an emperor as Jupiter (2nd cent. CE) found near the the starting line of the later Stadium. 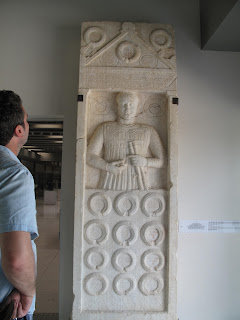 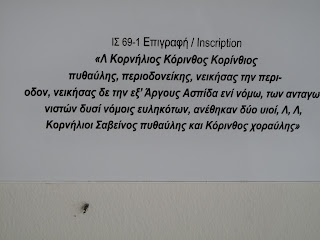 This is the inscription on the above stele. 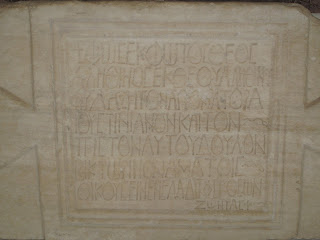 Prayer to the Christian god to protect the Emperor Justinian (ca. 560 CE) 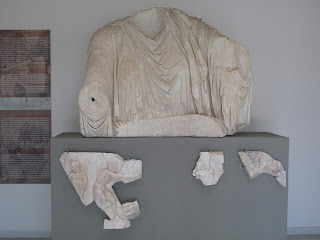 Fragments of the colossal statue group of Poseidon. 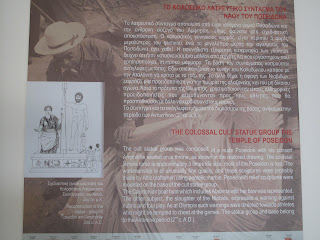 Info with a sketch of the group.

I will be able to post up the images from the Kenchreai site, as I mentioned, when I get home. I will say, the beach there is lovely. I'll be heading to the Archaia Korinthos site (home of the temple of Apollo) probably Friday as well as Akrocorinth. Then I head back to Athens for a photo extravaganza.