Using Freedpersons as an Argument for an Inclusive Rome?

I'm teaching Roman history again this semester (I do it every year) and I've committed this term to making sure that the course focuses more on social history, the provinces, and the movements of peoples within the Roman empire. I kind of dislike the phrase "decolonizing the syllabus" (I don't know why--maybe I feel like using that phrase is an appropriation of some sort), but I did make a big effort at centering the human experience of non elites and the broader scope of residents of the empire in my syllabus--what does it mean to have to 'toughen up' your raw recruits to stand in an ancient battleline? Why are Rome's political leaps frequently tied to violence against women? What about the sheer numbers of people being forced to move through enslavement? At what cost does "freedom" come for the freedperson? Should we tout the diversity and "liberal" nature of Roman citizenship over time given the horror that was necessary to bring about that diversity? When one of my students used the term "inclusive" to describe Roman character traits embodied in the myth of founding, I shuddered. I mean, sure, okay, but not really.

I guess one of the reasons I've zoomed in on these particular questions is because one of my areas of specialization is Athenian metics (immigrants/resident foreigners/freed slaves) and compared to Athens, Romans are pretty "inclusive" and "liberal" with their citizenship. And, since I'm trying to write multiple articles right now on the issue of how Athenians came to treat metics as they did and what formed their view of who could have certain privileges (land ownership, political access, etc), the comparison with the path from slave to citizen in Rome keeps coming to mind. I've come to the conclusion that 1. neither is "better", they are just different; and 2. that it has to do somehow with different relationship between land and identity. But, of course, I would think this since it's me and this is what I research--the intersection between geography, race, and identity.

Another reason why this is coming up is because of recent pubs that have been saying "let's do as the Romans did and be welcoming of foreigners!" and I've found myself trying to walk that nuanced line between yes, they did do that over time and no, they were kind of assholes about it and let's not overdo it. It's also been an issue in class discussions.

We Americans, especially, have a view of slavery that is very specific and recent studies show that even with that, American students aren't being taught the full extent of the reality of US slavery. There is good work being done of comparative US and ancient slavery, but we've got to be careful in any sort of comparisons that we don't try to "rank" them. We also need to be cautious that we don't assume that similarities in some aspects of slavery in one part of the comparison means other similarities exist for which we don't have direct evidence. I am thinking here, specifically, of freedpersons in the Roman empire and the assumption that there were also similar "freedpersons" in every ancient slave system (as most scholars do with Athens, though I and a few others disagree). 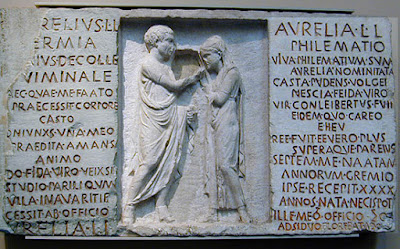 A freed slave in Athens entered the metic class. And, while being freed certainly could work out for banking slaves (e.g. Phormio and Pasion, in Athens), there was no pathway to citizenship for most freed slaves Athens or their descendants. Even in Rome, the freedmen of the Roman imperial household (especially under Claudius, it seems) fared well, but those are the exceptions--the .1% of slaves. What of slave nannies or prostitutes who "aged out" of their usefulness to their owners? What about the young girls whose owners freed them so that they could marry them? Or freed them to  marry a favored slave whom they also freed? These latter were common enough occurrences if we can judge from the fact that Augustus passed a law limiting freeing a slave until age 30 and also from the number of tombs that show these relationships.

The Romans were xenophobic at times. The refusal to extend citizenship to Italians before the Social War suggest it. The satirist Juvenal's persona represents xenophobic views that would not have been unknown to his readers (even if the author was mocking them). It's also true, however, that for every instance of xenophobia in Roman lit, one can counter with stories of access--populations aren't monolithic in their identities or ideologies. But when a student goes so far as to suggest that slavery in antiquity wasn't nearly as bad as modern slavery (or really slavery at all) if someone got paid and could be freed and their kids could be citizens, something has gone wrong.

Not to knock on Mary Beard (again), but I assigned her SPQR as my core textbook and so she is the students' first encounter with the concept of slavery and freedpersons, and her representation of slavery and freedpersons in Rome has them wondering (as many a Latin textbook, like Ecce Romani, does) if ancient slavery was somehow "better" than our modern version was. Does being freed at the end of your owner's life (or when you are no longer useful to them) make up for the forced movements, forced behaviors, physical traumas, loss of children and family, legal vulnerabilities and liabilities in "freedom" that were part of the enslavement? Does being given money for forced sex make it better than just forced sex? Does getting paid for one's labor make it any less painful and debilitating?

Beard mentions various situations for freeing in her book as passing information, including reference to a slave girl freed to marry her owner. In this case, one of the students asked "could a girl refuse to marry once free?" Um, no. She couldn't. In fact, there are a whole slate of rules surrounding the freedperson that make it clear that "free" was a bit of a misnomer. For example, a patron (the position the former master took over a freedperson) could legally commit iniuria (insult, assault, outrage) against their former slave. Even worse, a patron could petition to have a freedperson returned to slavery if they did not pay "proper respect" to the patron. How free was being freed really, if your owner could still beat you, force you to marry them (or another), and potentially re-enslave you?

The one benefit would be that any children you would have would be citizens--but Augustus' restriction on the age of manumission would have reduced the number of children being born to freed slaves. Neither SPQR nor Ecce Romani mentions any of that. Instead, being a slave is only as bad as a single owner's treatment and being "freed" is some golden ticket to opportunity and a path to citizenship for your family. But what family do you have, if you've been stripped of personhood and identity, only allowed to have relationships like marriage or children based on the whims of your owner or after manumission? How do you build a life in freedom?

The numerous freedperson tombs from ancient Rome attest to different configurations of "family"--close friends, freedpersons of the same patron, some marriages, some with children, some showing affectionate bonds--that make clear the way the identity of freedpersons was one of the greatest casualties of their enslavement and being freed didn't bring it back. Their names alone demonstrate this--first names were a version of the patron/former owner's name. So, all the freed slaves from a single owner all had the same name, just masculine or feminine. Even your name was owned and not free. You even had to title yourself as a libertus/liberta--a freedperson--not just a person. You weren't Roman, you may not know if you were Greek or Phrygian, or Egyptian, or Dacian, or Judaean. You were someone's former property and remained their quasi-property. 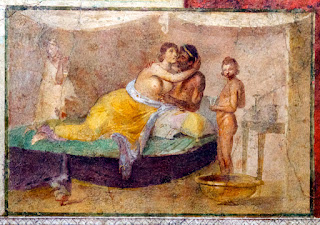 There were many things about the Roman world that we might call improvements on the Athenian approach to citizenship and slavery--the path to citizenship for freed slaves' descendants was one of them. There also wasn't discrimination of which slaves were freed--Egyptian, Greek, Ethiopian, Gallic, whatever, your children still became citizens (and in 212 CE, all free people in the empire became citizens). This meant an ever diversifying not only population of the empire, but citizenship itself. But too often we gloss over, first, the actual slavery ("but they got freed frequently!") and, then, the actual state of being a freedperson ("some were really rich!" cf Trimalchio). And we diminish the human experience of it all--of the displacement, the wiping of identity, the being sold and (ab)used and treated as a piece of the furniture. Of being expected to show continued deference to the former owner as a condition of freedom, of maybe having to marry them and continue to allow them to abuse you without recourse to divorce as a citizen woman might have. Of the daily reminders that they aren't really free, just kind of, with the hope that, if they had children, they will have the protections and privileges the parents don't.

Historically, ancient texts have been used to justify slavery. I wonder how much the Roman freedperson system influenced the treatment and legal status of freedpersons in the US during Reconstruction? How was it used to justify not allowing freed slaves to vote or own land or using them as continued forced labor despite freedom or preventing access to education? And how many generations living in this country is enough to treat the descendants of slaves as full citizens instead of trying to maintain them as "freedpersons" beholden to and at the mercy of their former owners? Because it seems to me that this country continues to treat African-Americans and indigenous peoples as less than (not to mention pretending the US southwest wasn't part of Mexico before we took it), granting them the status of freedpersons, but never full citizenship. While there was no amount of time living in Athens that could make a foreigner (even a fellow Greek) an Athenian, it only took a couple of generations of swimming in the Tiber to become Roman. We seem to have forgotten that last part, ensuring the half-life of the freedperson continues.