In preparing for a new research project, I have been rereading two books that have become important in the world of classical scholarship and to those who study Greek tragedy especially--Edward Said's Orientalism and Edith Hall's Inventing the Barbarian. I was caught up in the reasons presented by these two scholars in their prefaces for why tragedy and Orientalism go together and I want to jot my thoughts on it down here. These thoughts concern both whether we can truly conceive of Athenian tragedy or any 5th century BC Athenian text as "Orientalist" and what it is that we scholars gain or seek to gain by utilizing theories like Said's in our study of the ancient world--in other words, is it really a good idea to conflate ancient Greece (and I use this general term cautiously) with 19th century Western European imperial powers. Who gains from such a conflation? What I really want to figure out is what sort of political capital is gained by constructing the Athenians in the mold of evil British imperialists who oppressed and romanticized /fantasized the Middle East. Said's motivation is not that hard to find. Hall's is a little more ambiguous. 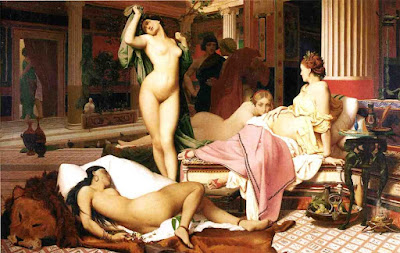 It has become fairly standard to think of Greek tragedy (really Athenian tragedy) as being pat of a number of "projects" that link it to the Orientalism ascribed to it by Said. Tragedy participates in the process of "othering" non-Greeks by its extensive use of non-Greek characters (i.e. barbarians) in its stories, often in the roles of slaves or socially/morally inferior tyrants. The Athenians who wrote, performed and watched these plays were rampant imperialists which situates this "othering" within the frame of an imperial project. Because these non-Greeks were often Persian or "oriental," the othering and the imperialism are specifically within the mold of 19th century western European domination and suborning of the "East" and the attendant cultural imaging of what the exotic "East" was like by their "western" overlords --i.e. "Orientalism. Orientalism, as Said describes it, is "a dynamic exchange between individual authors and the large political concerns shaped by empire...in whose intellectual and imaginitive territory the writing was produced" (14-15).

With regards Greek tragedy specifically, Said sees a play like Aeschylus' Persians as an example of the Orient being transformed from a very "distant and often threatening Otherness into figures that are relatively familiar (in Aeschylus' case grieving Asiatic women). The dramatic immediacy of representation in the Persians obscures the fact that the audience is watching a highly artificial enactment of what a non-Oriental has made the symbol for the whole Orient" (21). In other words, Aeschylus "speaks for the other" by imagining without basis in fact what the Persian court must be like and by presenting that space in a way that removes the agency from the Persian to represent itself and instead becomes a "Greek Persian"--a Persian as Greeks imagine them to be in all their exotic, feminine, despotic glory.

The tragic form requires all sorts of "speaking for others" given that it is a mimetic art form where a playwright imagines people other than himself in situations that are extraordinary or mythical and often occurring in places he has never been. And a play is "dialogue", people must talk to one another, taking on the role of people not themselves in order for a play to be a play. Let's not even start on the fact that the Persians and not the Greeks were the grand imperialists (an inconvenient fact for Said and others). If anything, Said should be imaging the Greeks as the colonized and not the colonizers. Maybe the Mimic Men of Memmi, who embrace and imitate the ways of the their (former) imperialist overlords, are a better analogy, if one needs an analogy. But, it seems that Said must have us understand the Greeks as the 19th century Brits themselves wanted everyone to understand them--as the progenitors of Western civilization--but only culturally. The Greeks themselves have been jettisoned, their ancient culture sanitized, bleached and restricted to the "Classical." To buy the Athenians as Orientalists, we have to buy the British/French/German imperialist ideal that the great cultures of the past were their intellectual heritage and property alone. We have to forget that until the mid 19th century, Greece was part of the Orient. In fact, we have to accept the propaganda and ideology which Said is supposedly trying to reveal as given in order for Said's own co-option of the Classical Greeks as Orientalists.

Maybe because I am a historian (even if my history is not about reconstructing narratives but a history of thought and ways of viewing the world) I like my theorists and scholars to do a little research and get their facts (what little facts we know) right. Maybe that research involves just going down the hall and talking to the Greek historian or the tragedy scholar--we are resources, you know. Knowing things doesn't make one inaccessible. It makes us useful! But yes, so Said's facts, like his influence Foucault's facts, are askance. Or rather, ironically, Said gets the descriptives right, but ignores the evidence in front of him in order to feed his pet project. What do I mean?

Said's description of the Western imperialist/orientalist actually relates more accurately to the evidence we have of how Persians represented themselves in iconography and inscriptions--how they viewed their subjects, the peoples they aimed to conquer, their own position in the hierarchy of the world. We seem to take for granted a level of Greek cultural superiority and diffusion that was not historically accurate until after the adventures of Alexander in Asia. In an ironic twist, the Hellenistic world, the world that resulted from conquests by a semi-Greek monarchy of the Persian empire, that was a world of cultural domination by the Greeks is called "Hellenistic" precisely because it is considered derivative and inferior to the great classical period of the 5th and 4th centuries BC.

The British particularly transported back in time that notion of cultural superiority to the Athenian culture they admired even while denigrating the actual period of time and its culture which held such power. The Hellenistic world wasn't "pure" Greek, but a fusion culture. Perhaps the dismissal of that fusion was a fantasy by the British imperialists that they could co-opt and alter their colonies while remaining "pure" themselves. In truth, there is no cultural superiority of the Greeks until after the time of Alexander and we don't really have the dynamics of Orientalism, "a political vision of reality whose structure promotes the difference between the familiar and the strange," until Rome's conquest of the Hellenized Asia when the West v East division became canonized in the reality of government function, language fluency and cultural heritage. Orientalism before the period of Alexander's successors is a fallacy, but a convenient one.

Surely, that was a bit elliptical. I'll have to clear it up soon.
By Rebecca Kennedy at September 18, 2010
Email ThisBlogThis!Share to TwitterShare to FacebookShare to Pinterest
Newer Posts Older Posts Home
Subscribe to: Posts (Atom)