Roma--Palazzo Massimo and Baths of Diocletian

I am clearly very behind since we visited the theater during a walk through Rome over a week ago, but it has been busy! Anyhow, now I will finally post about the the Palazzo Massimo and the Baths of Diocletian.

The tickets for these 2 museums are part of a 10 euro pass that also includes the Crypta Balbi and something else I can't remember. Best 10 euro I have spent in a long while. The layout of the museum is fabulous and the inscriptions in the baths are awesome. Of course, if you don't read Latin, they aren't all that exciting, but seeing as Max and I do read Latin... Anyhow, we spent over 6 hours in the two museums and did not finish at the Baths. Too. Much. Epigraphical.Awesome.

Let's begin at the Massimo: On the top floor, they have wall paintings from various villas that were discovered around Rome. In a number of the instances, they attempted to reconstruct the paintings on rooms or within structures of the size and shape of the original space. This first is from the villa of Livia where the Prima Porta was also found. The room in which the paintings were found (almost entirely intact) was subterranean. The colors and detail of the wild life is unbelievable. The opulence of the space is highlighted by the extensive use of blue paint (very pricey). The room shows a garden space, including a garden wall and plant and animal life that lived outside of the garden proper. 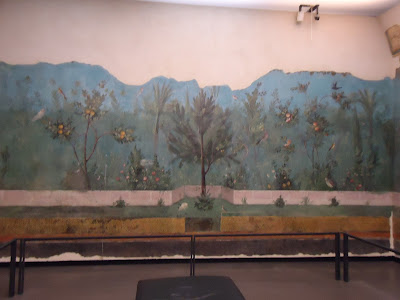 By Rebecca Kennedy at June 08, 2013
Email ThisBlogThis!Share to TwitterShare to FacebookShare to Pinterest

More Roma (though I am now in Hellas)

I am behind, I know. This always happens. But yesterday was a travel day to Athens followed by getting situated at the American School and attending a talk and reception in honor of Blegen (it was a full day symposium, but we were not here for most of it). Anyway, I wanted to recount a wonderful walking tour given me by my significant other through Rome from Monti back to the Centro (on the Gianicolo Hill). We began with lunch at a little restaurant called the Asino d'oro (Golden Ass) and then walked by Trajan's column and Marcellus' theater (in the Campus Martius) and through the Jewish Ghetto and meandered past the Pantheon where Bernini's little elephant is located. He is such a cute little elephant. I highly recommend the restaurant and the walk. And, of course, the little elephant.


Next up will be the journey to the Palazzo Massimo and the Baths of Diocletian. Epigraphical Fun Fest. So much so that my fully charged camera battery died. The Massimo is an exceptionally well laid out museum and the inscription at the bath's are phenomenal.  After that, we get to Greece, though there is little here I can post pics of since most of my photos are for "official" purposes. BUT! I am planning a trip to Eleusis and to Crete, so I'll log that.
By Rebecca Kennedy at June 01, 2013
Email ThisBlogThis!Share to TwitterShare to FacebookShare to Pinterest
Newer Posts Older Posts Home
Subscribe to: Posts (Atom)