Being "American", Sophocles' Intentions, and the Debates over "Western Civ"

I have this day been having two separate conversations on Twitter that actually revolve upon the same thing. The first was a convo with a colleague on authorial intent and Greek tragedy, inspired by last night's reading of Sophocles' Oedipus by Theatre of War. The second was a query from Shadi Bartsch on mask wearing:

While my first response was flippant (as were all the other commenters), there is, in fact, a very serious answer to this and it intersects with the way we attribute genius to individuals and meaning to plays written by men like Sophocles and also, whether people realize it or not, is at the heart of the "Why we MUST revere/teach/worship Western Civ" industry.

So, what are the connections? Let's start with the answer to Shadi's query.

After my initial flippant remark ("For their purposes, American = a$$hole fascist white person."), she followed up with:

The answer, of course, is yes. One can still be an asshole without being a fascist. But, there is a particular strand of asshole that positions itself as "American". And that has its root in the notions of American exceptionalism, the American Dream™, Manifest Destiny™, bootstrapping mythologies, the myth of the American West and "rugged individualism". There are so many names for it that we have been bombarded with in our school textbooks, in TV commercials (especially for trucks). It is at the heart of Libertarianism and Randianism. At its core is the idea that what makes the US "great" is that we are all out for ourselves. That rampant and unchecked individualism and unfettered competition (CAPITALISM!) is what makes individuals exceptional and so a country full of exceptional people will, of course, be exceptional!

But, as we know, there is no such world as a world where everyone is exceptional. Instead, we end up in a world where some people are "more valuable" than others because they are exceptional while others aren't. This is an idea core to social Darwinism and eugenics (and NOT democracy), but which we used to not say out loud.  Oh, how the times have (un)changed! 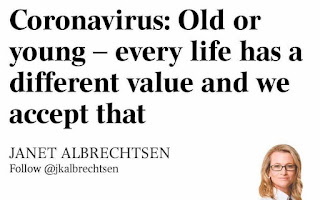 So, the exceptional people have more value --they are the JOB CREATORS who just happened to have fired or laid off something like 20 million people in the month of April in order to meet quarterly stock targets. They are the ones pushing to force the 'less valuable' people back to low wage unessential work in order to get their money back even while the US government has literally handed them billions of dollars to cover losses and keep them afloat. This is the reality of American exceptionalism and "I got mine" rugged individualism, but the mythologies that surround it and which MUST BE DEFENDED from the likes of universal healthcare, support for public education, and public health policies that don't involve eugenic-style selection of the type Janet there thinks is normal, has brought those who are most harmed by these myths to become its defenders. And they defend it by rejecting vaccinations and masks in public.

What does Sophocles and authorial intention have to do with any of this?

A colleague (Latin teacher and medievalist by training) had a little back and forth with myself and A. Pistone over whether asking the question "Why did Sophocles write this" functions or matters. Here is the beginning of the convo for context: 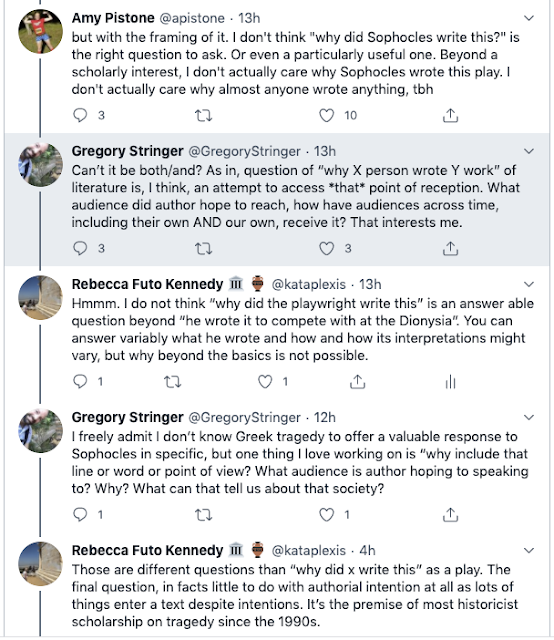 There is a difference, of course between pondering what the author of any work might have intended (we obviously intend to convey things when we create) and THE intent of the author as embodying the meaning of the work--Greg is really advocating for the former and this is a totally useful and valid conversation to have, but many people (I will not name names. I will not name names) mean the latter. There is still in classics a strong tendency to treat performance texts as written texts, to ignore the dialogic and oral nature of those texts. Looking for the singular perspective of the author (who may not even be fully responsible for the text as it has come down to us) in the case of performative texts that are, by their genre, defined by their audiences, ignores the nature of the work. But, tragedy, and Sophocles in particular tends to get trapped in "GREAT MAN CLASSICS" in ways that do this. And it was this, not Greg's point, that Amy and I reacted against. He is not the bad guy.

With Sophocles and Oedipus Tyrannos especially there is an idea that the play embodies universal truths. But those truths aren't ones that different peoples at different times and in different contexts are expected to find. No, indeed. These universal truths are really a singular TRUTH that emerges from the intent of a singular genius, Sophocles. And it is for us to both find that truth and to revere the exceptional man who produced them. And if we do not find that Truth, it is because we are incapable of it--we must be a too poor, too not white, too not a man to be able to see the genius' truth. And all those works of scholarship that propose to read Sophocles through feminist or class or other lenses are "revisionist" in a bad way and are denying Truth.

It shouldn't be controversial when someone like me says that texts have meanings that are produced despite authorial intention and at the point of reception and that this means any text can have a variety of interpretations and even 'truths'. It's what actually makes works like tragedy so appealing--because they can be accessed in different spaces and times to produce meaning while still carrying in them all the past meanings that others gained from them. It should not be controversial to say that every text contains truths and not Truth. And, yet, this brings us to our third intersection.

The emphasis on authorial genius and Truth is no different from and a product of the same myths of Manifest Destiny, American Exceptionalism, and the American Dream. And these are foundational to the Western Civilization narrative and so MUST BE DEFENDED.

Classics has been at the heart of the American Exceptionalism story since its beginning, but it was in the 19th century, as the "American West" was conquered, indigenous peoples eradicated or removed, and when the Lost Cause myth started us down the road to Jim Crow that things got super entrenched. I've written about this numerous times on the blog (example), there are articles on the way Latin textbooks have been used to perpetuate the ideas of the Happy Slave, etc. The above painting is a beautiful example of the ways "America" (which became especially in the Plato to Nato era the beacon of the "West") has been dressed up by the Classical. And university education and the Western Civilization curriculum have been integral to forging a shared White, elite identity for those who view revering of the canon and the "Great Men" within it is a cornerstone of the Western Civilization narrative. This thread by Dani Bostick on the most recent entry into the "Why We Must Teach Western Civ" catalogue (shockingly, from the National Review *insert sarcastic expression*) pretty much hits a BINGO on what we can come to expect from such articles. But, some people may be unaware of how this elitist argument is part and parcel of the Libertarianism that been intentionally trickled down into the "Everyman Real American" ethos--the one time trickle down has really seemed to work!

The narrative of American exceptionalism is premised on the Frontier Thesis, which argued that it was the westward expansion that forged American identity and which, unsurprisingly, was originally explicated in a speech in Chicago in 1893 at the American Historical Association meeting--coinciding with the World's Columbian Expo. This thesis is, in many ways, encapsulates the way this myth roots the Libertarian ethos at America's imperialist, capitalist core. In decades of cowboy films, textbooks called "The American Experience", and all of us playing Oregon Trail, this idea that America was about our rugged individualism, about pulling ourselves up by our bootstraps, and about how we all could, if we worked really hard, own our own 40 acres and a mule or strike gold (or black gold even) has been burned into us. And it means, essentially, that our freedom, American Freedom™ is about being free to do what we want--even at the expense of others (and ourselves). As Ibram X Kendi put it in a recent Atlantic article "We're Still Living and Dying in a Slaveholder's Republic":

The freedom to do, not the freedom of others to be free from harm--that is supposedly the American way. That is where the singular genius, the competitive individualism, the search the Truth and not truths takes us. And where it comes from. This is at the heart of the Western Civilization narrative. It is the heart of the White definition of American. It is why the same people who will tell us that only Sophocles' intentions matter are the same people who want to rush to open businesses, deny care or relief for those most harmed by their actions, and refuse to wear masks to protect both themselves and others from harm. It's a most undemocratic way to express one's freedom, but somehow those of us who care about others get to be "unAmerican".