Sarah Bond has written on the issue of the fetishization of whiteness in the history of art with respect to ancient sculpture. Her discussion centers on the influential work of  Johann Joachim Winckelmann and his monumental Geschichte der Kunst des Alterthums (1764). Museums and expensive art books were one way Winckelmann's theories were popularized in the 18th and 19th centuries, at least in Europe, where there were large, "encyclopedic" museums developing (the British Museum, the Louvre, etc) with increasing numbers of marble sculptures. In the US, however, museums were not prevalent in the 19th or early 20th centuries and were still limited to places like Boston and New York. And yet, it is in the United States that this fetishization of classical whiteness seems to have become especially prevalent in popular culture. The question I want to examine here is how. And my suggestion for an answer is that the  1893 Chicago World's Fair, aka the Columbian Exposition, and the White City catapulted classical whiteness as ideal into the consciousness of Americans, and its impact has yet to fade. This is not a complete guide or exploration of the connections forged at this fair between Classics and white supremacy, but merely an attempt at a beginning. 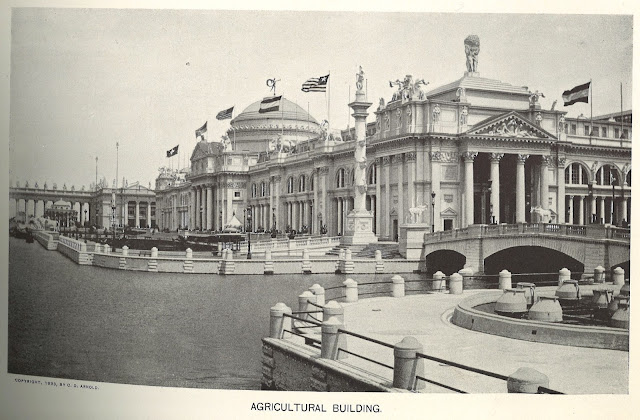 Recently my class discussed the  Fair. That this fair (and those that followed), the forerunners of Disney Parks and Coney Island, were designed to popularize white supremacy came as a bit of a shock to them. It is probably a bit of a shock to many people. But the creators of the fairs--the masters of industry, the banks, the federal and state governments, university academics and museum officials--didn't hide this fact. Documents written by the designers of the fair were open that the fair was for white Americans to see their place at the top of a racial hierarchy, and for non-whites to remember their subordinate place (there are some awesome anecdotes about this--ask me sometime).

The goal of the Fair designers was to create a utopic vision of America that intertwined the idea of technological progress to imperialist and colonial racial hierarchies to divine will--to merge Christian morality with evolution and industrialization as a new form of American patriotism, to "heal" the country after the horrors of the Civil War with a new "American" brand of patriotism--a national holiday was proposed (Columbus Day) so people could attend the Fair's dedication and the Pledge of Allegiance made its public debut as part of the ceremony. The utopia and the unified America the Fair constructed, however, was an explicitly white one inspired by the classical past. The White City (the Fair proper) was constructed as:


"a little ideal world, a realization of Utopia...[foreshadowing] some far away time when the earth should be as pure, as beautiful, and as joyous as the White City itself" (Chicago Tribune Nov. 1, 1893 quoted in Rydell 1984. All the World's a Fair. U of Chicago Press).

The position of non-whites was outside that utopia on the Midway Plaisance.

The construction and appearance of the White City was a homage to the Classical past in form, content, and ideology. The decision to build the White City along a stretch of marshy land along the shore of Lake Michigan reflected a confidence in the engineering and technology of the builders--Vitruvius himself would have been done proud by the feat. The designs for the building were neo-Classical and, although not marble (they weren't intended to be permanent), they were faced with plaster and painted white to reflect the whiteness of Parian marble. 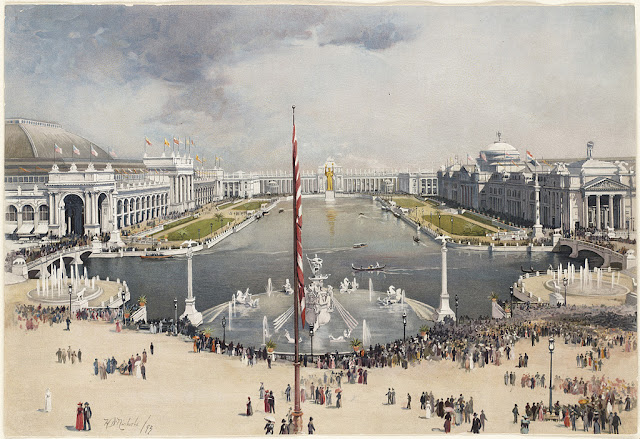 Of course, how white were the buildings of Athens that coloration of the White City was intended to reflect? Pretty white (except for all the color!)--the Expo buildings lacked the painted friezes and other elements of their inspirations in Athens. More importantly, though, were the sculptures everywhere throughout the White City. It's one thing to surround oneself with white building, quite another to do so with monumentally sized white sculptures intended to reflect ideal beauty. 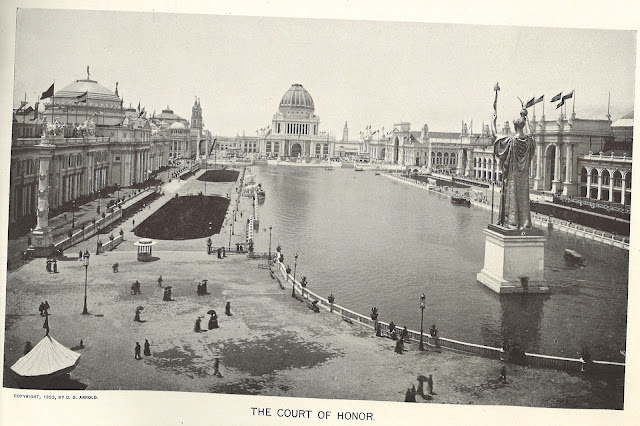 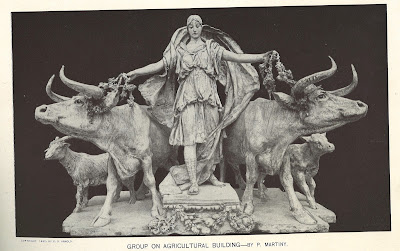 Each of the sculptures was commissioned for the Fair and showed clear Classical referencing. Even those sculptures that were not allegories or mythical (such as that of Agriculture right or the Statue of the Republic, also below) were intended to Classicize those they represented and elevate them to the level of the Classical past. Farmers, in particular, the "Average American" at whom the Fair's morality lessons were directly aimed--the "plain, sturdy, self-reliant, ambitious man" appeared in Classically monumental form. 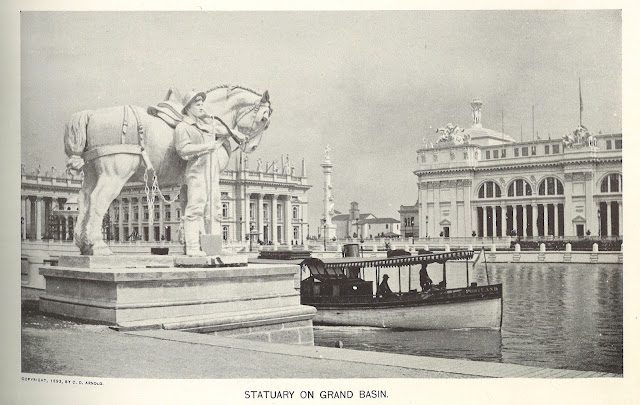 This White City and its idealized America was set in direct contrast to the Midway Plaisance where the different peoples of the world were put on display as entertainment and morality lessons. Just a few images demonstrate the contrast intended between the power, beauty, and technological advancement of "white" America and the darker skinned "savages" both within the US and without.

The geography of the fairgrounds was designed to show the difference between the world of the white race and the world of those "lesser races." The contrast was not lost on fairgoers (and they discussed it in Classical terms):


"That Midway is just a representation of matter, and this great White City is an emblem of mind. In the Midway it's some dirty and all barbaric. It deafens you with noise; the worst folks in there are avaricious and bad; and the best are just children in their ignorance, and when you're bewildered with the smells and sounds and sights, always changin' like one o' these kaleidoscopes, and when you out that mile-long babel where you've been elbowed and cheated, you pass under a bridge--and all of a sudden you are in a great, beautiful silence. The angels on the Woman's Buildin' smile down and bless you, and you know that in what seems like one step you've passed out o' darkness and into light." (from the novel Sweet Clover, quoted in Rydell)

The parade of "types" of peoples was meant to entertain and resembled more Pliny's peoples at the edges of the world than an accurate map of the world--stereotypes and exoticisms were emphasized in the name of entertainment.

How much of the theory of the expo, and not just the visuals, was also an explicit attempt to harness the wisdom of the classical past to white supremacy? The Congress on evolution on the "Intellectual and Moral Exposition of the Progress of Mankind" gave academic and scientific weight to the representation of the non-white peoples on the Midway.

The director of the government anthropology displays, Otis Tufton Mason, was himself immersed in ancient ideas on human diversity and embedded it into the fair.*


"The Chicago Exposition furnishes an excellent opportunity for testing the question--how far language coordinated itself with industries and activities as a mark of kinship and race, and how far climate and the resources of the earth control the arts and industries of mankind in the sphere of language and race." Otis Mason, Smithsonian Anthropologist and Coordinator for US Govt. Anthropology display at Chicago 1893

The ancient theory of environmental determinism (most explicitly discussed in the Hippocratic Airs, Waters, Places and in Bk 6 of Vitruvius' de Architectura) linked climate, geography, and topography to human cultural and physiological differences. Otis Mason was a strong proponent of the theory and linked it explicitly to technological advancement, particularly the ability of a culture to use technology to overcome limitations of environment. The thrust of his scholarship and his Smithsonian and World's Fair displays underscored this link, heavily influenced by his Classical education (he was, in fact, a Classics teacher before turning to Native American studies).

But the goal of the fair was to popularize these theories, particularly the race theories upon which white supremacy was founded and supported. And popularize these ideas, it did. Commentary on the Fair in Puck espoused a less "scientific" type of environmental determinism that shows how the science of the Smithsonian and university anthropologists would translate outside of academic circles: 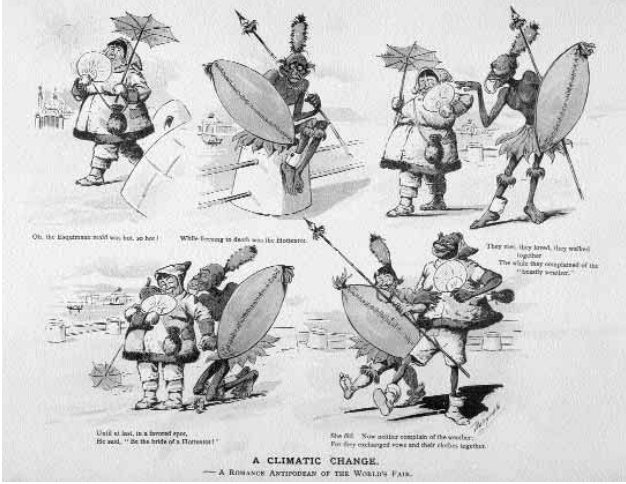 Puck's illustration to mark the day set aside at the fair for African-Americans is particularly obvious: 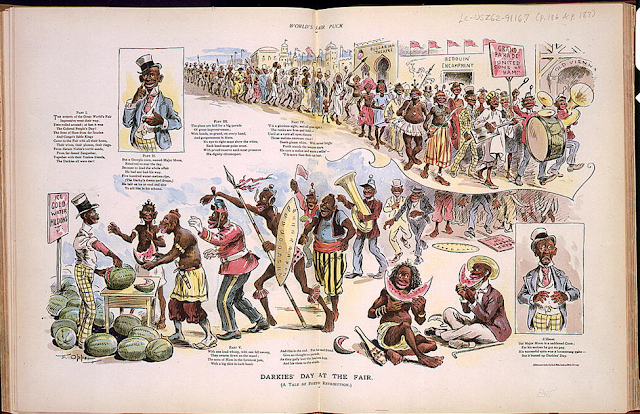 The connection between the Classical past and the white guests was emphasized, particularly emphasizing the patriotism and Americanness of both classicism and whiteness: 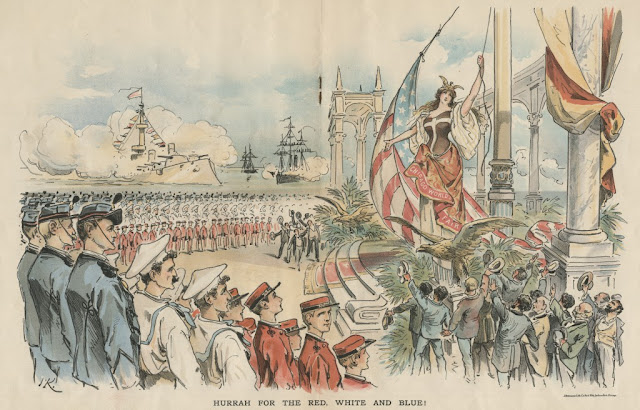 The anthropological hierarchy of white America over all other races of the world was not subtle in the least: 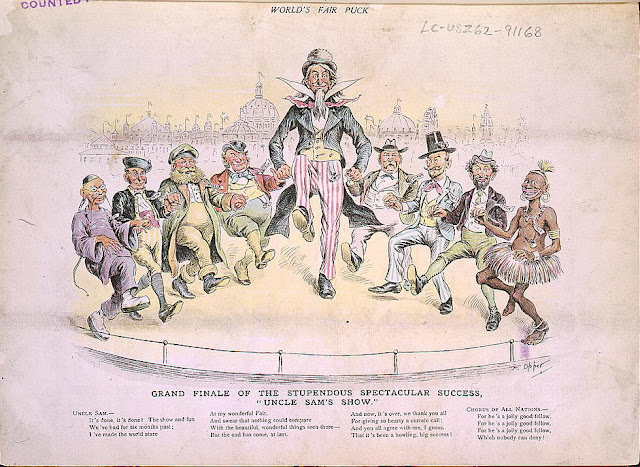 The combination of the Classical past in imagery and idea with the technological innovation and patriotism expressed in the fair had the aim of creating a unified white America and recruited them on a journey to a great white utopia--a utopia that "average" Americans could be a part of. The impact of the fair's Classical architecture was decades of architectural mimicry in cities throughout the country. The equation of Classical antiquity with America and with "civilization" was a lasting memory.


"May we not hope that the lessons learned here, transmitted to the future, will be potent forces long after the multitudes which throng these aisles have all measured their span and faded away?" (Potter Palmer, 12 Oct. 1892, at the public dedication of the Fair).

Palmer's wish came true. The 1893 Chicago World's Fair forged an indelible bond between Classics and white supremacy that we are only now starting to shake loose over 100 years later.

For a fuller picture of the extent of Classical imagery used in the Fair, see the Rand McNally & Co. Handbook of the World's Columbian Exposition (1893), especially the sections describing the Midway, and the documentary Expo (narrated by Gene Wilder).

For those interested in the extent to which ancient theories of environmental determinism permeated the Smithsonian, see Brill's Companion to Classics and Early Anthropology, ed. by Emily Varto and scheduled for release in 2018. Among other relevant chapters in the volume, I have one on Mason and the relationship between his classical education and anthropological theories.