Power & Authority: Who has it? How do we use it? (Or, Navel gazing)

Over the last week, I have been involved in a couple of discussions on Twitter and email where (I must admit it, although I know it will shock my regular audience) I was arguing about institutional power structures. In both cases, people seemed to want to deflect the discussions from the level of institutions to individuals. In one case, it was suggested that I was not using my power enough/correctly? and anyway, as a person with “power,” I could not critique institutional structures. In the other, I was supposedly abusing my “power” by “citationsplaining.” This charge (is this a thing now? or a hapaxlegomenon?), I believe, means citing a work of relevant scholarship in discussion to someone who already knows it. And since we all know all the relevant bibliography already (of course), citation is no longer necessary.

Leaving aside the otherwise interesting discussion of the “citaitionsplaining,” I want to talk about my power. In the contexts of these discussions, I would assert that I do not have power; what I have is a certain kind of authority. There is an important and meaningful distinction between power and types of authority that is worth thinking about, especially for those who:
It's interesting to me, of course, because this interplay between power and authority informs so much of my research. But it also seems to be a big part of social media and scholarship and...just human interaction generally.

Let's start with the obvious: I read way too much Foucault and Edward Said in the 1990s (thanks, Erik and Victoria!) and it has shaped my understanding of power--what it is and how it operates. The Stanford Encyclopedia of Philosophy entry on feminist perspectives of power provides a very useful starting point.

Power seems to have lots of possible definitions and permutations, but really, for our purposes here, Foucault’s idea of “power over” is what we mean. i.e. Power is the ability to get others to do what you want (imperium). In order to effect power, one has to have authority, but having authority (auctoritas) doesn’t mean one has power.
Max Weber provides a good framing to get an explanation for authority. Weber divided authority between "traditional," "charismatic," and "legal-rational." "Traditional", Weber argues, comes from longstanding custom, like patriarchy--we don’t have to continue to organize societies around masculine power, but we do because “that’s how it’s always been done.”

Another type of “traditional” authority might be tenure. So, at my home institution, I have certain protections that come with having gotten (after 6 years on the job market) a certain type of job that after jumping through hoops for another 6 years enables me to write, teach, and participate in campus governance without fear of losing my job. I can be critical of the institution, how it is run; I can teach controversial topics; I can write about the ties of my discipline to white supremacism. The tenure system is a vestige of what used to be “the way things are done.” In some places, it still is a form of “traditional” authority, but not in others. 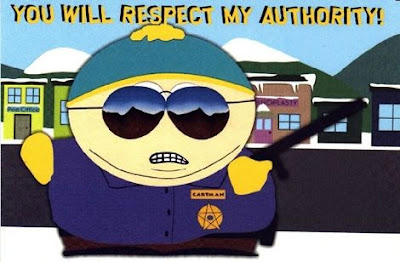 As a tenured faculty member, I also have institutional power because at my college, faculty are part of the governance structure, which means I also have “legal-rational” authority. "Legal-rational" authority inheres in the office--"the office of the President", for example. Regardless of who the individual is, the institutional position or affiliation that individual has (i.e. tenure) grants them authority to wield the power of that institution in certain circumstances (like when on a committee) and expects a certain level of deference. This kind of authority can also function outside of one’s home institution. It does so in a couple of ways. One example is the prestige economy of institutions, Another is scholarly reputation based on peer reviewed publication (one of the ways you can get tenure). This is a kind of authority I have because I have published well-respected, well-reviewed, and cited books and articles that can borrow the prestige and power of the presses they are published with and the other scholars who review them. I can exercise this authority through citing others, editing volumes and inviting others to participate and reviewing books/manuscripts/articles. I can benefit from the power that attaches to this sort of legal-rational authority by getting speaking invitations and making decisions about whose work is and isn’t ready to be published. Another example of legal-rational authority comes from affiliation with and participation in professional organizations. I was once the co-chair of the Women’s Classical Caucus. At that time, I was asked for my opinion on lots of things and invited to various committee meetings, included on too many email chains to count, and had the ability to help shape institutional policy and practice. But that sort of power goes with the position, not with the person. Once I stopped serving on that committee, I stopped being included on those email threads (phew!), stopped having any power to shape policy and practice. Not having that (or any) affiliations outside of my home campus now means that I do not have legal-rational authority outside of my campus because any authority I had was only by association or affiliation with external authorities. And it isn’t my thing (nor am I properly situated in the prestige economy) to use affiliation anyway to gain other forms of institutional power and legal-rational authority. 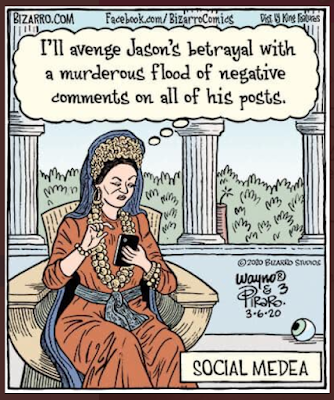 What that leaves me with is (and do not laugh) "charismatic" authority. This type of authority derives from an individual's personality. For me, it is my public work and Twitter persona that gives me this type of authority. To have “charismatic” authority doesn’t mean I am particularly likeable--let’s be honest, I am very easy to dislike. The very things upon which any authority I have is based--aggression, willingness to question the status quo, and excessive honesty—are the same things that undermine me. But this is all I’ve got. How did I get it? From Twitter and my blog, mostly. But, of course, it is just a blog. Anyone with an internet connection can have one. It doesn’t have any institutional backing to give it something resembling the type of legal-rational authority that can come from writing on a press. A blog platformed on and affiliated with institutional entities like Discover Channel or Forbes or Eidolon or TLS gets authority from those platforms. My blog (which doesn’t even use Wordpress!) has its authority only from the person writing it, who does have the scholarly credentials to write a respectable blog, but has to have some sort of charismatic authority in order for people to care enough to read it. It is all rather complicated, isn’t it? I do not really have any power--not the kind of power that some people seem to think I have. I can blog about these recent incidents, of course, as obnoxious as that is (an occupational hazard for those with charismatic authority). But, I can’t make anyone do what I want them to do. I can’t make people with platforms center the needs and voices of secondary and undergrad-only teachers instead of almost always centering people from PhD granting institutions as if their opinions are the only ones that matter and their perspectives somehow universal. Because it certainly isn't the case that saying "I am aware that I am privileged" is enough to erase that privilege when it is still the loudest voice in the room. I also can’t make organizations change their policies or practices by tweeting or blogging about it or participating in an email discussion. Nor can I negatively impact someone’s career or status by throwing a citation into an email to support my position in the discussion. In fact, throwing out citations is a way to shore up my lack of power within an institutionally recognized form of authority. I do not feel confident resting the argument upon my own expertise, so I summon someone else’s. A major limitation of charismatic authority is that it is singularly dependent upon the good will of others to exist and can't rely on platforms or institutions. It can disappear just as quickly as it appears. But, this extra-institutional, unaffiliated sort of power is actually easier to use while maintaining my principles (a benefit also of tenure). I don’t have to compromise in order to effect some sort of political agreement in policy (I am not part of those conversations). Nor am I ever tempted to try to use my affiliations with institutional forms of power to personal benefit (can't abuse what you don’t have!). The only way I can maintain any semblance of authority is by adhering to the principles that people found worth investing with authority to begin with. Otherwise, we could see #cancelKennedy trending. I think about this fairly regularly, because one of the ways that institutional and traditional authorities are maintained is by not questioning the status quo. It is by investing in “neutral” or “blind” practices and policies. Charismatic authority, while the most precarious and even dangerous, can actually move conversations by questioning the other forms of authority. But it does so usually at the cost of alienating those invested in or embedded within those other types of authority. And maintaining it without sacrificing one’s principles usually means having to not care if you lose it. When people say I have “power,” they are referring to this unmoored, unaffiliated, and unstable kind of authority. If people want to grant me this kind of authority, sure, ok. Just best to lower your expectations about what someone can (and cannot) actually do with it.