Whenever colleagues ask about the material I am working with on the intersection of the "classical" and scientific racism, I talk a lot about how theories like environmental determinism got connected to global capitalism and industrial technologies and then became the basis for rankings of  peoples. Then I like to show them the ways these theories were popularized and became embedded in the fabric of American popular culture. Often, I point to the Chicago 1893 World's Exposition. But, the Louisiana Purchase Expo in St Louis in 1904 (connected to the 1904 Olympic games) was perhaps even more explicit. It too had a "White City" that was contrasted with hundreds of acres of human zoos of non-European peoples, including a 47-acre Filipino "reservation" intended to focus visitors' understanding of the Filipines as an imperial acquisition for exploitation of resources and where only some of the local population could be "saved" by education and assimilation under the "White Man's Burden."  This stuff is pretty explicit, not hidden at all, so it isn't difficult to say with ample evidence that those scientists and politicians and financiers in charge of the fairs were openly White supremacist. It was accepted.

Anyway, I wanted to share one piece of evidence here because I thought it might be a useful visual for people to understand the infrastructure of American racism and how many of our prejudices were fed by popular entertainments. This is the front cover of volume 5 of the official guides to the Louisiana Expo along with the description.

Description: "The photograuve herewith is from an excellent specially prepared drawing which very accurately illustrates, as nearly as the science of ethnology is able to do, the characteristic types of mankind in a progressive order of development from primitive or prehistoric man to the highest example of modern civilization. The two central figures are symbolical, representing Intelligence, with the torch of Enlightenment and book of Wisdom, invading the darksome cave in which Ignorance skulks in companionship with bird of evil omen and superstition. It is aspiration lighting the dungeon of savagery and directing the race to better conditions, moral, intellectual, and social." 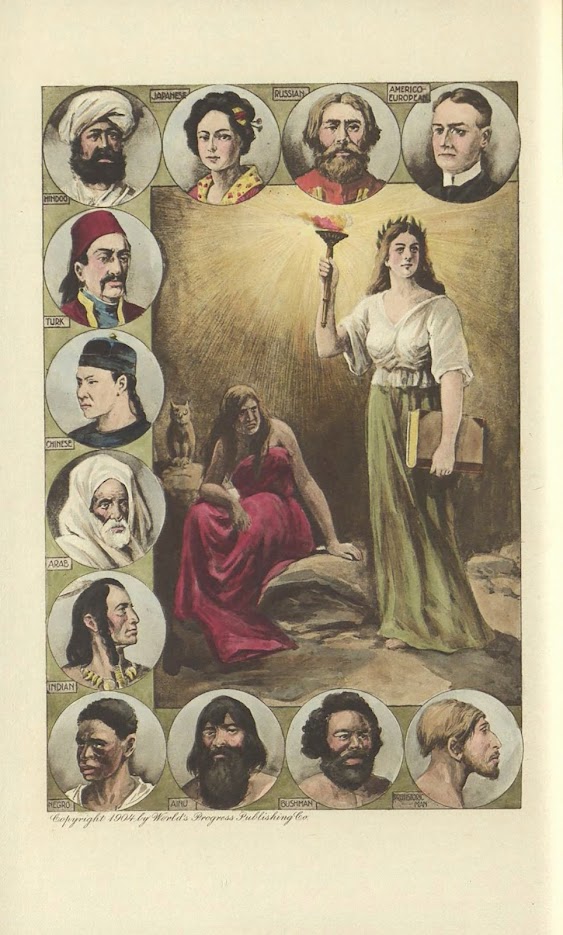 Today I had a conversation with a bright undergrad at University of Pittsburgh who is working on a research project and wanted to know about the translation of a passage from the sourcebook. Here it is, Manilius Astronomica 4.711-730:

For that reason, humankind is arranged by various standards and physical qualities, and peoples are fashioned with their own complexion, indicating through their physical appearance, as if by private treaty with nature, the shared society and similar substance of their people. Germany stands tall, with its towering offspring, all of it blonde, while Gaul is slightly dyed with a redness akin to Germans. Hardier Spain is an assemblage of compact, sturdy limbs. Romulus endows the Romans with the face of Mars and, through the union of Mars and Venus, well-balanced proportion of limbs, while clever Greece announces through its well-tanned people [720] their preference for athletics, especially manly wrestling. Curly hair at the temples reveals the Syrian.

The Ethiopians defile the earth and form a people drenched in shadows, while India bears people less burnt. Egypt, flooded by the Nile, darkens its people more gently because of the well-watered fields nearby and makes their complexions only moderately dark by its mild climate. Apollo, the sun god, dries out the people of Africa with dust in their desert sands, and Mauretania contains its name in the peoples’ faces, [730] the title “mauretania” being one with the color itself.

The part he was asking about is: "The Ethiopians defile the earth and form a people drenched in shadows..." and the question was about the translation of maculare as "defile". Welp, I am here to tell you that the translation is wrong. Given the context, it should be "darkens" or "marks". What we have is a gradation of colors: from the darkest to the lightest shades of black/brown.

The word maculare has lots of figurative pejorative uses, which I imported into this translation, but I don't think it belongs. Instead, I assumed a prejudice by Manilius that he likely did not have and then put it in a translation, which will be read by lots of people who don't know Latin and will go around thinking that ancient Romans had the same sort of prejudice we do in the modern world. Some will think that justifies their own anti-blackness. Others will then be turned way from Latin authors thinking this is a norm for them, too.

Anyway, this is just another reason to say no to any new projects and hit the ground running in the next couple of years on a revision and expansion of the Sourcebook. There are numerous things in it that I would no longer do today and we really need to update and fix the errors.