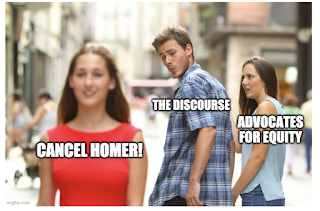 Some brief Sunday morning thoughts on Culture Wars. Not really developed and surely not original. But it woke me up, so writing it out seemed the best way to deal with it.

Population management: It isn’t just race, but gender, sexuality, class, disability--these are all ways of placing people into categories and using these categories to manage populations. The management of these populations is in the service of dominant groups in order to maintain power. Individuals can be coopted into power or be granted access to power, but the presence of those individuals neither undermines nor erases the fact of the population management system--they are the exceptions (granted in Plato’s Republic, for example) that demonstrate the myth of meritocracy that underscores the logic and propaganda of those with power.

Gender, sexuality, race, class, disability are all systems of oppression in so far as they put people into categories that then position people as groups hierarchically in social, political, and legal practice. This serves people at the top of the hierarchy, who then use media and education as ways to naturalize the system and obscure its operations.

Institutions of higher education and education in K-12 schools need to be controlled because over the course of the last few decades, areas of study have emphasized examination of the systems of oppression in an attempt to both reveal their function and dismantle them. Women’s Studies, Queer Studies, Black Studies, etc--these programs all undermine the standard narratives that were traditionally provided by Econ, Anthro, Soc, Poli Sci, Bio/Genetics, Psych, and humanities programs in general that served the needs of population management.

Example: Who is served by the standard use of the stock market and import/export measures and GDP to decide the health of an economy? Certainly not those who do not have capital or access to it. Certainly not those intentionally excluded (i.e. the working classes, i.e. the majority of the population). Who is served by the notion of humans as economic “rational actors”? Certainly not anyone except those who want to present their models of economic development as embedded in human nature, when they are, in fact, systems intended to concentrate wealth in the hands of a few. News programs like NPR and schools of economics in higher education generally support and naturalize this narrative.

Culture Wars are one way to stamp out opposition to and revelation of the systems of oppression at work.

‘Socialist” is a Culture War slur tossed at anyone who questions the system, thanks to the use of media and higher ed to suggest that caring for a society generally and distributing wealth to those whose labor produce it is a social, economic and political bad. Using media and education to convince those left out of such distribution is a primary tool for population management. They do so using other forms, like race and gender and sexuality.

Culture Wars around abortion are designed to obfuscate the ways women are oppressed through societal structures around reproduction (child care, health care, etc). “Bathroom laws” and “Girls' Sports laws” are ways of emphasizing the clear gender division that is necessary to maintaining the fiction of the “natural” order of men over women and reproduction as women’s primary (and only, really) natural function.

Culture Wars around race create a dominant block around whiteness that encourages ignoring the realities of economic and gender oppression as it functions in society in the name of shared racial superiority. The current attacks on “Critical Race Theory” are intended to prevent learning about the histories and realities of the use of “race” as a tool for population management. The propaganda pushes for the designated "white" part of the population to willingly sacrifice BIPOC communities in order to preserve a minimum of other privileges (which are not really privileges, just tiny morsels tossed out by those with power). If you can’t talk about race, you can’t reveal or understand its function. If you can’t see or understand it (if you are “colorblind” or “don’t see race”), then there is no work to be done to dismantle it.

Because higher education has been moving in the last 50 years towards systemic critiques of power and of the mechanisms for population management, higher education must be contained and, if needed, the critical studies, dismantled. Humanities was once a bastion of power and privilege. As it has intentionally become more critical in its relationship to systems of oppression, it has been repeatedly attacked and undermined. These attacks play out in the media in no small part because of the investment by elite power in maintaining its control over its tools for population management--why does “Classics” matter enough to warrant debate in the national press? Because it has always been a tool for race, gender, and class control. As it more firmly slips out of the control of traditional power, it must be either brought back to heel (as in the past with yokings to Great Books and Western Civ curricula) or destroyed (along with critical race, gender,sexuality, and class studies).