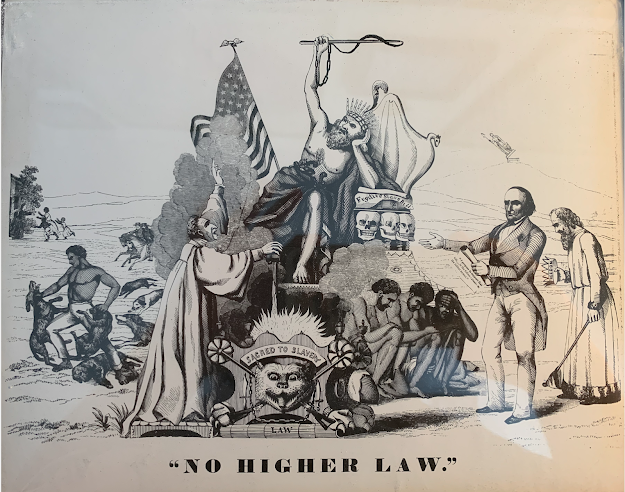 I inherited this image from a recently retired colleague in History. According to the New Hampshire Historical Society, it is a reproduction of an etching from 1851 created by an unknown artist but likely published by William Harned (publishing agent) of New York City. Harned is probably most well-known for his distributions of anti-slavery publications. It is a useful image for understanding some of the ways that the Classical was connected both to pro-enslavement and abolitionist arguments.
Here is the description from the New Hampshire Historical Society:

In center, throned figure (Slavery) leaning against a table of four skulls supporting a closed Bible covered with a scroll titled, "Fugitive Slave Bill"; figure is wearing a crown of finger bones, holding whip up in air with right hand, left hand bent supporting head, two guns tucked into belt of robe. In front of central figure (allegorical wild beast) appears as an altar decorated with a cat's head, rosettes, urns, two crossed rifles, and flanked by knives with flames at top; labeled, "SACRED TO SLAVERY / LAW".Three crouching slaves and a man (Daniel Webster) standing on the right looking at viewer, holding a scroll of paper that reads: "I propose to support that / bill...to the fullest extent -to / the fullest extent." To the far right, profiled male figure (Liberty) with long hair and beard, hunched over, holding a crown in his right hand that reads "FREEDOM", and in his left a liberty pole and cap. Figure to left is robed figure (religious minister) arguing at central throned figure; left hand pointing toward flag; right hand pouring incense on the fire. Left middle ground, bare-chested (fugitive) slave fights pack of dogs spurred on by two horse and riders. In background, slave family flees into open arms of white family on left; on right toppling statue (Goddess of Liberty) on hill. 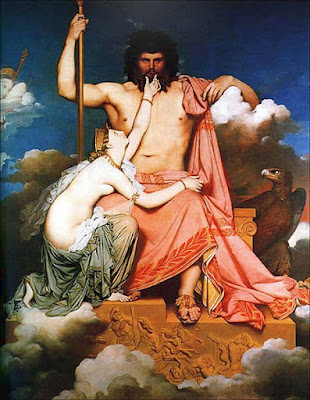 The image shows "Slavery" styled as Olympian Zeus, surrounded by the appropriate clouds on his elevated throne, a slavers whip in his hand, while the religious-looking figure to his lower left (maybe representing Christian Abolitionists, in contrast to the Bible resting under his right elbow) is positioned very much in the manner of Ingres' 1811 Zeus and Thetis, pleading with him. Of course, this plea will be unheard and this may be manifested in the separation between the pleading figure and Slavery as opposed to the closeness granted Thetis to her Zeus.

While Daniel Webster looks at the viewer with his declaration of support for the act, "Freedom" (looking kind of like an Orthodox priest?) is taking off his crown and his Liberty cap (a French Revolution reference) is hanging at the end of its pole (is it glued on?).
In the background, we see a statue tumbling, which is said to represent the Goddess of Liberty, but it styles very much as an Athena,with spear and shield. As an Athena enthusiast, I should look for more of these obvious uses of her as Liberty.

The representation of Slavery as a Zeus-like Olympian brings to mind the Zeus of Promethean reception, maybe here we see the influence of Goethe or Shelley or some other Romantic version inspired by [Aeschylus] where Zeus is tyrannical and the tone misotheistic?

There is a lot to say about such a positioning of Zeus and the Romantic idealisms that influenced and inspired ideas of Freedom (Liberty) and American Slavery--how does the Romantic impulse interact with the supposed Enlightenment ideals of the Constitution? Does the image seek to make clear that those supposedly natural rights and ideas that kept Black Americans enslaved and ineligible for Freedom were in fact fits of temper and tyranny? I keep coming back to Prof. Danielle Allen's "Our Declaration", in which she argues that the ideas of liberty and equality are not in opposition and that they were intended in the Declaration to be mutually supportive--there is no "Separate, but Equal," an argument made by Southern enslavers to prop up first, enslavement, and then Jim Crow. To quote from Steven B. Smith's 2014 NYTimes article on Allen's reading:

"Separate and equal implies mutual respect and reciprocity; separate but equal, hierarchy and domination. To paraphrase the great Dinah Washington, what a difference a word makes!"

Images like this one made to comment on the place of Slavery as an institution in America suggest that not only is Allen correct, but that in the debates over the continuation of slavery, slavery apologists knew it and needed to find ways to combat it and erase that 'self-evident' truth in order to support the continuation of a tyrannical, non-democratic practice. They won this war of words and meanings, as the history of our country since 1865 makes clear, but we should never forgive any of those who fought for enslavement and Black oppression--because it is pretty clear that as 'men of their time', they knew damn well it was evil.
As for the use of the "Classical", this one is getting added to my collection for discussion. The image makes it very clear what Olympian Zeus/Slavery means to the enslaved--death, torment, despair. How much of this characterization is purely an appeal to the Romantic Prometheus myth? And how much of it reflects the centrality of Greco-Roman classicism to Southern defenses of enslavement? Someone who has done more work than me on these types of images may be able to answer that. For now, I am just putting it out there.