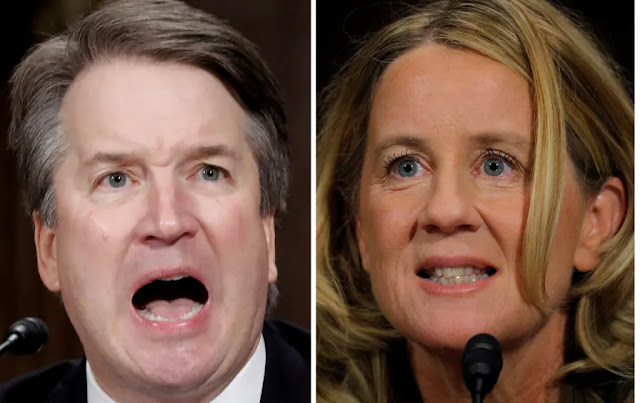 It is one of those times again where the real world and the world of my scholarship are in horrifying sync. This happens when one works on issues of race/ethnicity and gender. For the last year, it has been the horrors of the current administration's immigration policies and the overt racist white supremacy of our justice system. Now, as I put the finishing touches on an article on strategies used in ancient Athenian court cases to steal inheritances from women and children, I find the strategies and even the language of the cases mirrored in the current supreme court confirmation hearing process.

In the ancient court cases I am working with, women are being taken to court by distant relatives of their dead fathers, brothers, or husbands over inheritances. The distant relatives, wanting the estates for themselves, will say ANYTHING to get their way. The women being attacking through the courts are citizen women, usually widows or the only child of a citizen man. But citizenship for women in Classical Athens was not secure or robust. While there were processes for verifying the status of male citizens that could clearly establish their legal rights, there was no equivalent of a birth certificate for women. You had to provide witnesses in the courts to the fact of a woman's citizen status. And in extreme cases (like Demosthenes 43), you had to provide witnesses that a woman even existed!

Beyond having to verify one's existence, there are other standard strategies. Strategies that will seem really familiar to anyone with any experience of sexual assault cases. The most common strategies (found in the legal speeches of Demosthenes and Isaeus) are:

All of these tactics appear in the Athenian courts. All of those tactics are on display every day in media reports about our judicial system, especially when it comes to trying to hold white men (especially powerful white men) accountable for their actions. All of them have been on display in the past and now in supreme court confirmation hearings. Anita Hill withstood it. Christine Blasey Ford is dealing with it now.

The current nominee for the supreme court, Brett Kavanaugh, has been credibly accused of sexual assault. Yesterday, the accuser Christine Blasey Ford gave testimony at the hearings. Dr. Ford's story resonated with everything I remember from my own high school experiences in the late 1980s and early 1990s--I quit drinking my junior year in high school and had to stop attending all the parties because being fully aware of what was surrounding me made me disgusted. The atmosphere Dr. Ford described resonated with my high school reality--even at a large public high school. Rich kids are rich kids regardless of what school they attend and our school in San Diego had plenty of them. The calendar of young Kavanaugh also fits this world--July 1, 1982 is a day everyone should be looking into more.

It also resonated with everything I have learned of college frat parties and rape culture on college campuses. Kavanaugh's demeanor and testimony hit me hard as it brought back two very specific cases I've read. Almost anyone with experience with college sexual assault situations can tell you: He was lying (about the drinking, about what he can and can't remember). He was trying to bully his way to deniability. He probably also had a serious alcohol problem, but can't admit it (he actually cried while talking about how much he liked beer in high school).

That he became a lawyer should not surprise anyone since almost every case we see is that privileged white men who are part of this alcohol fueled sexual assault system (and it is a system) love to try to use legal language and lawyers to protect their privileges. They pretty much always sue and are at the heart of why women don't report on college campuses--they will use the law courts to out their accusers and traumatize and terrorize them as much as they can. There is a lawyer in the town I live in whose entire job seems to be to represent male students who have been expelled for sexual assault. His tactics are no different than we see in the ancient texts. And its goal is to silence women.

Watching the hearings yesterday reminded me that when a woman speaks, whether it is to report or recount the assault or as a questioner, or as an expert witness, or as  judge--the most common tactics are still those used in antiquity.

I am confident that Kavanaugh will get confirmed--that's how power works and there are still too many people who allow it to continue because they imagine they have some access to that power. Or because they may talk about justice, but there is no justice for the non-white, non-men in our world. The identity politics of being a man, being white, being rich, were all on display yesterday. The right to be angry, the right to cry about beer while saying they never blacked out while drunk ("just vomited and fell asleep"). The privilege of having one's "life destroyed" if they don't get to sit on the supreme court. A Marist poll out today shows that 54% of Republicans think Kavanaugh should be confirmed even if he did commit sexual assault. Women aren't fully human to them.* And we continue to let the law be used to ensure it.


*This is a short post and so I've left a lot out that could be added. The issue of race and the ways non-whites in this country are brutalized by the legal system needs to be kept to the front of our minds. Anita Hill's treatment was and is still discounted by white women because of anti-blackness. There is some really good writing being done on that already. I will link them up later.