As the accusations against men in power continue to pour out, I've been compelled to consider the complicity of women in silencing or ignoring boys and men who have also been assaulted by these men. In some instances, it is the singular focus on girls and women in advocacy. While there is so much I agree with in Laurie Penny's "The Unforgiving Minute", it ignores the role of men coming forward about their trauma as part of and important for this moment.

In other instances, the silencing occurs as anger at a supposition that when boys are the objects of assault, the media and general public are far quicker to condemn.  For example, Kevin Spacey's fall from grace has been fast and hard and came after only a handful of accusations, while it took over 90 accusations and decades of people knowing about it to take down Harvey Weinstein, more that 16 women accused our current president with no impact and Roy Moore has plenty of defenders because 14 year old girls are too often considered appropriate targets for men's sexual desire--in ancient and modern times. And now, George Takei, everyone's favorite former Star Trekker, has been accused of assaulting a young man (not underage)--let's see how this one plays out.

I've read quite a few Twitter posts in this vein--that abuse/harassment of boys and young men is taking more seriously--and it makes me sad. Boys and young men who are sexually abused or harassed also have long term impacts. Our collective anger should include boys and young men who have also been victims of men in power. Because there is still something to be said for how much we minimize the amount of sexual assault boys are subjected to, especially when the perpetrator is an adult woman. Let's not forget how many boys it took speaking out to even start a conversation about priests and the Catholic Church. 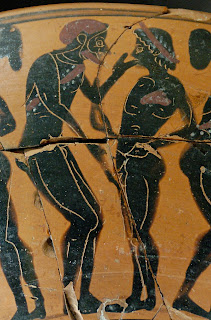 All of this has gotten me thinking about the sexualization of boys (young boys) in ancient vase paintings and the ways that women are sometimes positioned as viewers of their sexualization. We have many vases from antiquity, particularly from between approximately 525-475 BCE, that show boys being pursued and fondled by men. Sometimes these boys are slaves (whom we would expect to be sexually exploited by owners regardless of sex or gender), other times not. I m not going to go into details here on ancient pederasty, which you can read about here (and here is specifically in Athens). Instead, I want to focus on vase images in which women are represented as viewers of pederastic acts.


A particularly interesting one of these vases is in Munich (Munich 2421). Here is a link to the full set of images from the Corpus Vasorum Antiquorum. This is what we call a kalos vase--a vase given as a gift that has the word "kalos" ("beautiful") inscribed upon it. It is usually (so people suspect) a gift for  a boy from his older pursuers. The lower register of the vase (pictured) shows older men admiring the kalos Euthymides.

This particular image of the boy Euthymides is rather tame considering images on these vases often show the young man/boy being fondled by the older man, as pictured above and below.

What has stuck some scholars as unusual in this vase, however, is that the vase includes a group of women on the upper register relaxing like male symposiasts and playing the game kottabos with the inscription "I cast for you, beautiful Euthymides."
These women are most frequently said to be prostitutes of a certain type--a "hetaira" or "courtesan." I've argued in print, however, that these women should actually be viewed as of like status to the men admiring the boy in the lower register (Kennedy 2013, 71). Thus, we see elite men and women both offering their approval and registering their desire for the "beautiful" young man. In other words, the women are complicit in the sexualization of the young man/boy.

Sympotic vases often represent sexualized scenes with women (women who are almost universally deemed to have been prostitutes by scholars). These women (not just in the vase pictures, but universally) are called prostitutes because of supposed hard and fast rules about women at these drinking parties--the only women who should have been there, according to some of our Athenian sources (and later, Roman era sources looking back at Classical Athens) would have been paid sexual labor, or at least, they must be fully sexualized women. The images are imaginary, however--they are not mirrors for real life--so calling the women in them 'prostitutes' is kind of a signal of what we mean when we equate women with sex. It also makes it less uncomfortable if the women who are sharing the sexualized gaze directed at these boys are 'women of ill repute' and not 'respectable' women.

The young men and boys, however, are not considered male prostitutes when they appear in these vases (though certainly male prostitutes existed in Classical Athens). Instead, they are considered the proper objects of male affection, sexualized young men and boys to be admired and fondled and pursued by important men. Given gifts, they were expected to concede to their much older lovers. When they grew older, it was assumed they would participate in the same game, this time as the 'lovers' instead of as the 'beloved.'

The images of women gazing upon and approving these relationships and the desirability of boys suggested in the image above from Munich 2421 is made real in the fact that the cups that both male and female symposiasts drank from contained images of boys being pursued and fondled by men. What is only implied on the exterior of the kalos vase pictured (where our boy is fully clothed), is made clear in the round images painted at the bottom of the cup--finish your wine and you get to see the sexual fantasy of capturing your kalos boy.

Men and women both drank from those cups. Women, too, gazed upon the sexualized boys. Did they approve of and maybe share the pleasure of the sexual pursuit of boys as the fictional Munich 2421 women did? Or did they gaze uncomfortably at the image and stay silent? Were they just happy the image at the bottom wasn't of yet another naked women? Or can we dismiss what the drinkers of that wine might have thought at all because they weren't 'respectable' women, after all? Of course their gaze was corrupt and corrupting... 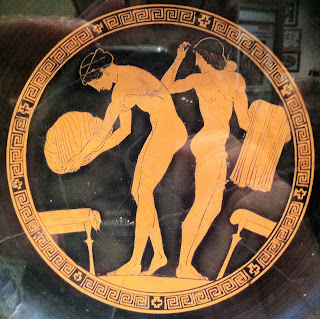 But let's assume that some of the viewers of these images were 'respectable' women--wives, daughters, mothers. Since most girls were married at around ages 13-16 to men who were usually around 30 (an ancient practice we should not think is ok to follow), this meant entire societies where girls were being sexualized and subjected to sex with much older men as 'just how things are.' It isn't hard to see why a 'few boys' being sexualized and pursued and groomed and fondled might not register outrage by women. Or why women might feel like protections for boys were greater than for girls. But were there?

Ancient Athenian pederasty is often discussed as a 'mentoring' relationship or as a 'social institution' that had rules. Marriage had rules, too. 'Rules' don't make it any less exploitative and abusive when the rules themselves are designed to maximize the pleasure and power of the older man and diminish the safety, power, and pleasure of the young woman or young man.

All of this is to say that I don't believe that the wheels of public condemnation or justice move any more swiftly when the sexually abused is male instead of female. The silence around the sexual abuse and exploitation of young adults is damaging for everyone and is perpetuated because those in power feel, it seems, Zeus-like in their abilities to sexually harass, abuse, and exploit anyone and everyone. As women, we have endured millennia of silencing, abuse, harassment, and exploitation. And many feel that we in a historic moment when maybe, just maybe, we will now be believed and won't need to stay silent for fear of retaliation or shame. But let's not forget who the perpetrators are. Let's not help those perpetrators silence their other victims just because they happen to not be women.