Last week, my Ancient Identities class discussed texts on ancient north Africa--Libya, Carthage, and Numidia. In the texts, one of the things that the students discovered is that north Africa seems to have a lot of different types of peoples living in it and that no one seemed to be all that interested in what color they were, though we know that these people were not all of the same skin tone. At one point in his description of Libya, Herodotus (4.197) tells us that the native populations of the continent were Ethiopians and Libyans (which included Marusians, aka Mauri, among others) and that the Phoenicians and Greeks were immigrants.

Typically, we read that Ethiopian is the term that the ancients used to refer to people with dark skin tones, those we would call black, and that these are often also referred to as sub-Saharan Africans. In a recent blog article, Dr. Caitlin Green sums up earlier scholarship and attempts to make sense of their arguments that the increase in 'sub-Saharan,' i.e. black Africans, in the Mediterranean in the Roman period by suggesting it was possibly a result of the slave trade by the Garamantes--she herself uses 'sub-Saharan' is quotes to indicate the inaccuracy of the term. Herodotus, however, clearly places black Africans in northwest and north central Africa and not as slaves but as indigenous and early. And according to Herodotus, they are living north of the Sahara, since the Sahara beyond its edges merges into the uninhabitable zone and then Ocean. He states that they live "south" of the Libyans, but "south" for Herodotus is still north of or in the Sahara. 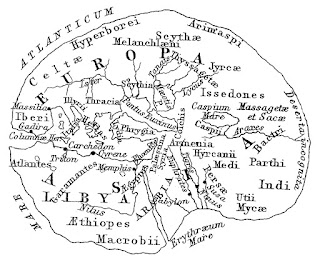 As far as Herodotus and others well into the Roman period were concerned, 'sub-Saharan' either didn't exist or it was an uninhabitable zone in between them and the Antichthones, 'opposite-land' (as Pomponius Mela calls the mystical southern continent).  Strabo, too, writing in the the 1st century BCE-CE, writes of groups of black Africans living in north western Africa--the Pharusians and Nigritae, whom he places near the 'western Ethiopians' (17.3.7). How do we know they are likely black? Because they are said to be like the Ethiopians and the Pharusians, in particularly, are linked to southern Indians, whom many ancient authors think either were immigrants from Africa or migrated to Africa. The Mauri (later Moors) are also located in northwest Africa, but Mauri, like Berber, is not necessarily a clear term that associates with skin tone in antiquity--evidence links them more to geography and nomadic lifestyle and when skin colors are mentioned, they range from light to dark.

In other words, there were black Africans living north of and in the Sahara in antiquity. Herodotus never mentions their skin tone as warranting discussion, likely because he had placed them in the torrid zone on the map and environment dictated they would be dark skinned. The Phoenicians and Greeks came there with their lighter brown skin, more northern Libyans were environmentally browner than Greeks and Phoenicians, but lighter than the Ethiopians and others.

Why do I care about this? Well, for a number of reasons. The first one is that I have frequently been told that individuals like Augustine of Hippo, whose father was a Berber, could not possibly have been black African. And because whenever the issue of blackness in northern African spaces is discussed, there is pushback (especially concerning Egypt) even though we have ample visual and literary evidence that north Africa and West Africa in antiquity were not singular in skin tone. But there is an investment in trying to keep it as 'white' as possible. I often recall to mind that, as the Roman historian Sallust reminds us, many ancients thought Africa was part of Europe (BJ 17.3). I'm sure many an anti-black African ignores or does't know this or assumes it makes them 'white'.

The other reason is because my class starts on ancient texts on Ethiopia tomorrow and I asked them to read an article by a Late Antiquity/Early Medieval religion scholar ("Racism, Color Symbolism, and Color Prejudice" by David Goldenberg) who argues that there was clear color prejudice in the ancient Greek and Roman worlds in contrast to Frank Snowden's contention that antiquity was "Before Color Prejudice." Of course, all scholars pretty much see the problematics of Snowden's arguments, but Goldenberg's are also problematic. The first is that he has to hunt through about 4-5 definitions of racism (or, Ben Isaac's proto-racisms) before he lands on one that fits his needs. Second, he, like Snowden, basically finds evidence by looking for texts on Ethiopians or where 'blackness' is a specific point of discussion. 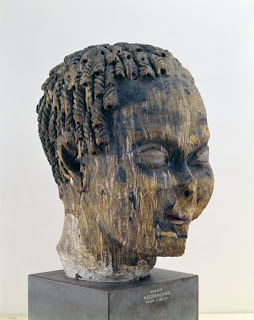 Many of the texts on Ethiopians are non-derogatory--they are praised and admired for various reasons. The texts on blackness, however, tend to carry negative connotations--it is clear that characters in Juvenal and Petronius, at least, do not find the physiology of black Africans attractive. They don't find people who are pale (i.e. anyone from northern Europe) attractive either. Their own somatic norm--a light brown--is preferred aesthetically. What Goldenberg and others miss, however, are all the texts that discuss people who are clearly black without ever mentioning their color at all. If you include those texts in the discussion and unskew the evidence, the number of ancient Greek and Roman texts that make clearly negative statements that see black skin as denoting both physical and mental or moral defectiveness is surprisingly small. It exists, but not as the norm.

We see clear racism (or proto-racism) in our ancient texts, but it is distinctively different, as Goldenberg states, from anti-black racism as it exists today and has existed for centuries. He isn't necessarily on point about the obviousness of color prejudice in Greek sources (he has a point that Juvenal clearly doesn't like dark skin, but Juvenal hates on everyone). What Goldenberg is really valuable for, though, is tracing the negative connotations of the color black--from associations with death, ill-omen, and evil--and its transference to people. Perhaps unsurprisingly to some and surprisingly to others, it is in the early Christian (really starting in Origen) and patristic literature that we see the prejudice against blackness truly become a 'thing.' As Goldenberg writes:


"The innovation of Christianity was not in the essential nature of the association of black and evil. It was, rather, in the degree of application of the association. In the church fathers, the theme of Ethiopian blackness became a crucial component of the Christian focus on the battle between good and evil, which pervades patristic writing."

Ethiopians in Christian writings are even associated with devils and demons. It should come as no surprise, therefore, that the conversion of black slaves in the southern United States was resisted by many slave owners--not only might it mean that these slaves would need to be treated as their neighbors in God's eyes, but also that, legally, it might mean they would need to be freed. Many a colonial legislature passed laws declaring that Christianity didn't fundamentally change the nature or soul of the black slaves. If blackness is evil, the logic goes, then how could black peoples become otherwise without changing skin color? Christianity has this notion embedded from its early(though not earliest) phases.

The question of when black skin color became a target of group prejudice is one that my students come back to again and again and I am sure it will come up this week as we read texts about and look at representations of ancient Ethiopians through Greek and Roman eyes. Not everyone agrees on how neutral the descriptions are--there are scholars who argue that Herodotus was clearly prejudiced against the blackness--but he doesn't even bother to remark on blackness on many occasions when discussing peoples who are most definitely balck and his assumption that Indian and Ethiopian semen must be black (3.101.2; an easily refutable hypothesis that Aristotle bluntly refutes at Hist. Anim. 523a17-8) may be more an attempt to understand how it is that Indians and Ethiopians gave birth to dark skinned children even when outside of the heat of their native territories--the heat was thought to burn the skin (or the semen) thus making people darker.

I can't say exactly how any of the ancients understood skin color as an environmentally, and yet heritable trait precisely; they are clearly puzzled themselves. What we can say, however, is that black Africans lived throughout the continent as it was known to the ancient Greeks and Romans, including in Egypt and western and central Libya at least as early as the 5th century BCE. Their territories skirted on the Sahara or they were thought to have lived as Nomads within it; in other words, they weren't strictly 'sub-Saharan.' But, is prejudice against blackness coincident with their appearance in the historical imagination of the Greeks and Romans? I would argue no. And the racist desires of some people to keep them out of north Africa altogether in Classical antiquity should not make us overlook the fact that they were there, not as merchants, not as slaves, but as indigenous, permanent residents according to our Greek and Roman sources.
By Rebecca Kennedy at October 08, 2017
Email ThisBlogThis!Share to TwitterShare to FacebookShare to Pinterest
Labels: ancient Greece, ancient Rome, blackness, ethnicity, Herodotus, north Africa, race, Strabo
Newer Post Older Post Home