Talking about Diversity Across Time and Space

A lot has happened since my last blog post including another round of commentary by N. Taleb and others of like mind on the ethnic/racial composition of north Africa (and Roman Britain) in classical antiquity. The commentary was directed at classicist Mary Beard, whom they have accused repeatedly of being racist.

Beard herself has asked a question that I think needs answering, or at least pondering:

I think the roots of the problem--namely, how it is possible for someone who is trying to show the racial and ethnic diversity of the ancient world to be accused of being racist for doing so--are 1. that the modern and ancient worlds constructed identities differently, 2. that there are different modern groups of peoples who lay claim to identities based on descent (real or imagined) from specific ancient groups, which results in 3. those people who identify through descent with an ancient identity feeling like they are being pushed out of or excluded from a modern identity when classicists and ancient historians point out that the ancient version is not the same as the modern one.

In other words, at dispute are the differences in what "diversity" means in ancient vs. modern contexts.

What diversity means in a modern context is governed by the realities of whiteness and the fact that 'diversity' for many white-identifying people = 'people of color', i.e. 'non-white diversity'. To wit, here is one such manifestation of this confusion:

Diversity = 'sub-saharan' = 'black' = something I addressed in the last blog on colorlines in ancient north Africa and the inaccurate assumptions that north Africa is and was historically 'whites only'.

But, it is also true that mentioning 'white ethnicity' (what one would call talking about Germans, Spaniards, Scyths, and Persians as 'diverse') is frequently viewed as a way to avoid hiring, engaging, or otherwise acknowledging the structural biases against people of color in our society. This puts many a classicist in a bind when talking about a diverse ancient world because there was, for all intents and purposes, no 'whiteness' in antiquity and so any diversity we talk about avoids distinctions between 'white people' and 'people of color' and focuses instead of the breadth of peoples from Europe, Africa, and Asia who interacted and lived together and even shared citizenship in the Hellenistic and Roman periods. This puts us in direct conflict with the contemporary discourse of race/ethnicity and diversity since many of the people who fall under the category of 'diverse' in antiquity count, in some (but not all) contexts, as 'white' in the modern world. 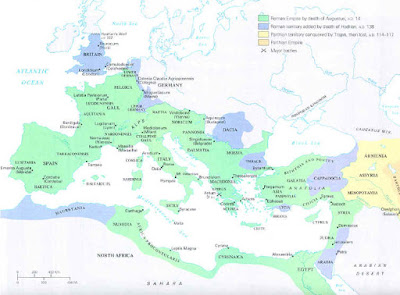 When classicists/ancient historians/archaeologists say that the ancient world was diverse, we are not talking about how many 'people of color' (in contemporary terms) were Roman citizens or lived in ancient Antioch--we aren't talking about a distinction between 'white' people and not. Rather, we are talking about diversity from the perspective of how the ancient Greeks and Romans considered ideas of foreignness in their multi-cultural, multi-ethnic environments--Gauls, Germans, Greeks, Persians, Egyptians, Ethiopians (both semitic Ethiopians and not), Libyans, Scyths, Indians, Jews, Arabians, Spaniards, etc. were all 'foreign'.

The ancient Greeks and Romans did not have a category of 'whiteness' that equates with ours and, when they did use whiteness as an attribute of groups of people, it normally was associated with marginalized groups like women, people with certain diseases, and groups of peoples who lived at the far edges of the north. Most Greeks and Romans in antiquity who 'mattered' (i.e. men) would likely consider being called 'white' an insult. Reminding a Roman citizen originally from Dacia (modern Romania) of such marginal status would have been to highlight their borrowed Romanness.

So, this is a big cause of confusion--diversity in antiquity is not marked by the same 'color' categories that modern ones are. But the modern world is marked by its adherence to color concepts as definers for in and out groups. And 'whiteness' has demarcated the 'in crowd' since, roughly, the 17th century. And while it began as a way to distinguish 'Anglo-Saxons'--the white Anglo-Saxon Protestant--from African slaves, the 'Orient' or colonized peoples--by the mid-20th century, previously excluded groups like southern and eastern Europeans, some north Africans, Jews, Arabs, and other light-skinned peoples in the near and middle eastern portions of Asia were all incorporated in the legal category of 'white', at least in the US Census.

As a result, 'whiteness' has become an overarching category in the modern world that encapsulates numerous distinctive cultures and peoples who, in the United States, at least, frequently consider themselves or are treated in everyday life as 'people of color,' but who are 'white' in the government census and, at times, in their self-identification. This leads to some confusion when some members of a group consider themselves 'white' while others do not. This is further compounded by the fact that the division is not actually one of skin tone (i.e. "color") but of religion--Christian = white, Muslin = color. This can be traced, in part, to the use of the term 'Christendom' as an identity marker in opposition to Islam (most frequently linked to the Crusades, but the term persists).

And if we add the additional layer of colonialism (and the recent discourse surrounding the Greek/Italian/Portuguese/Spanish debt issues) into the mix, particularly with the UK and northern European countries that used classical antiquity as a gatekeeper in their colonialist endeavors, we have a recipe for accusations of racism when one engages with people who identify themselves as 'white' (and who have been included in 'whiteness' for the last 50-100 years) and, who also view themselves as direct, genetic descendants of the ancient peoples from those regions who were categorized as 'foreign' by Greeks and Romans and whose presence in Greek and Roman societies are marks of diversity. They perceive the attempts by UK or white US scholars to once again restrict the classical Greeks and Romans to the property of 'Anglo-Saxon' peoples.

John Ma suggested (rightly) to me in a Twitter conversation that this colonialist backlash is real. And this colonialist backlash, particularly involving Greece (treated by their northern European neighbors for centuries as lesser than), north Africa, and the near/middle east of Asia, is percolating to the surface in the discussions of diversity in Roman Britain, in particular. So that when scholars from colonizing countries talk of peoples in the former colonized nations as 'diversity', i.e. not white, it is as if they are kicking them out of the privileges that whiteness provides and being recolonized. Their own claims to whiteness, however, seem to at times manifest in anti-black or anti-Arab sentiments. As Ma also commented:

The pushback sometimes manifests in ways that mirror the racism they are claiming to be experiencing.

The issue, therefore, seems to rest on a fundamental difference between ancient and modern ways of constructing identity--there is no whiteness in antiquity that defines cultural collectives (other than women) nor do blackness or browness or yellowness or redness constitute valid categories of peoples. There are no black or white races in antiquity nor any color in between or outside. So, when we talk about diversity in antiquity, we are talking about it with different measures. And, importantly, we are talking about it from the perspective of ancient Greeks and Romans themselves. Our modern categories do not hold. But, we need to be careful to articulate why and where the differences are because the reality of colonialism and classics' historical role in supporting it is not dead and in the past. And maybe, just maybe, Twitter's character limits and threading don't provide the best venue for doing that.