I keep wanting to finish my post on the use of the Dorian invasion myth as a way of claiming ancient Greece for northern Europeans and (now) whiteness, but I am having a hard time getting to it since I have to write this entry for the Herodotus Encyclopedia on ethnicity and it is killing me. So, I have decided to use this blog post to write out what I would say to Herodotus if I did not have to write a neutral representation of Herodotus' writings or the 40-some years of scholarship that is expected of an encyclopedia entry. 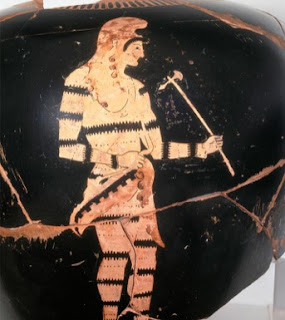 Damnit, Herodotus. Can you please decide what it is you think you are doing with all these ethnographic passages? If, as Hartog suggests, you are doing it in order to get your Greek readers to reflect upon their shared identity as Greeks, can't you be clearer on that and just say Greeks are Greeks because x, y, and z? Instead we get something like "Egyptians aren't like us in these ways and they are like us in these ways, so that means that these are the categories that matter at this moment in my story in defining who we are as Greeks--we don't speak an Egyptian language, we don't worship half animal gods, and we pee in private instead of outside...oh, and we don't usually let our wives do all the shopping--how silly is that!". So--language and customs seem to matter most. So say many a scholar, like Dihle, Hall, van Wees, and Jones.

But this one time in Book 8 (you know, at almost the end!), you have characters (very important ones, at that) give a magical list that says that what makes Greeks Greeks. The Athenians tell the Spartans that of course they won't betray them and side with the Persians after all (you know, like the other hundreds of Greek poleis who did, like the Thebans and all the Ionians) because we share: blood (homaimos), language, institutions of worship, and cultural character (ethos). I get that the shared blood thing works for Athenians and Spartans who are both pretty exclusive societies when it comes to intermarriage and stuff, but that means they don't intermarry with each other either! How mythical is this blood? And the other stuff? Did you mean it? Because if you did, can you tell me what you mean by ethos? Is this cultural? Inborn? How is it determined? Is it a Greek thing?

And what about shared descent with non-Greeks? Are Greeks and Egyptians intermarrying? Do they come from the same geographic space originally? Gruen tells us that we should ignore everything Herodotus tells us when trying to figure out what does and does not constitute ethnicity in Herodotus (or anywhere else in our Greek sources) because everyone knows that it is only blood that matters and that ethnicity in antiquity meant blood--culture, customs, language? None of that is a concern. But if this is the case WHY, HERODOTUS, DID YOU SPEND SO MUCH TIME TALKING ABOUT ALL THAT STUFF!? PAGES AND PAGES?! And why don't you just say that in the beginning?! Instead, you do all this stuff about barbarians and women-knapping.

Speaking of barbarians--is it a linguistic category? Or is it a cultural thing? Is it something you can stop being? Can you become one or are you born that way? Hartog and Lloyd and Rossellini and Said (both of them) and the other Hall don't all agree, but seem to make a really big deal out of it. Oh, and so do pretty much all the scholars writing between 1989 and, like, 2015. Is barbarian like your "42"--the answer to life the universe and everything?

Both J. Hall and Thomas suggest what you really emphasize is nomoi and origin myths. I get the origin myth thing. You tell us a lot of those and, if we believe you, everyone is related (usually thanks to Herakles or his daddy)--one big human happy family with some cultural differences. How they got those differences you don't say--though, let's recall your awesome (wrong) theory that Ethiopians and Indians are black because they have black semen. This is an easily testable hypothesis, dude. Get it together.

Sometimes you give me the impression that you think climate and geography are the creators of ethnic difference (soft lands breed soft people, anyone?), but then maybe custom is king? At this point, I have no clue what ethnicity is in your book filled with descriptions of peoples and cultures. You tell a good story, but you are wearing me out.
By Rebecca Kennedy at September 15, 2017
Email ThisBlogThis!Share to TwitterShare to FacebookShare to Pinterest
Labels: ancient Greece, barbarians, environmental determinism, ethnicity, Herodotus, humor
Newer Post Older Post Home