A True Story about Student Loans

There are a lot of people who talk about student loans who actually know nothing about them -- even people who work for the Dept of Education that oversees them. They know nothing about them because they don't live with them and the arcane processes that the government and private servicers and lenders have developed to keep people who took those loans out in perpetual debt. I thought I would shed some light on what it is like to live with student loan debt for decades even though you should have qualified for the Public Service Loan Forgiveness program years ago. Something like only 1% of people with student loan debt have had their loans forgiven. That number should appall you. The whole system should appall you.

Let's  start with my situation going into college so readers understand how and why student loans happen to begin with, especially in a pre-2008 crisis world:

I was a first generation college student living in a house where the rule was 18 and out. We were not provided any funds to college if we chose to go that route nor were we allowed to live at home. That meant that regardless of what the FAFSA report which I was required to fill out said about "parental contribution", there simply was none. And, given my father's income at the time, there was no financial aid for me that wasn't a loan.

So, it was 1993 and I worked about 30-40 hours a week at Red Lobster and took out student loans to pay for college and all of my living expenses. The two things my father paid for were my car insurance and health insurance. My mother sent me $300/month to help with rent and such. I lived in San Diego, which even then was too expensive for a teen trying to go to college and live on their own at the same time. I went to UCSD, where tuition cost $1800 per year when I started and cost $4200 per year when I finished. Then there were books, other fees, parking and transportation, rent, food, utilities, etc. I was at UCSD from 1993 to 1997 and accumulated $18k in student loans through the direct federal subsidized and unsubsidized loan programs. Then, I went to graduate school.

I was in graduate school for an MA and a PhD at Ohio State from 1997-2003. I finished fast by Humanities standards. My first year was unfunded and out of state tuition was $18,000/year. I took out direct federal student loans and worked at another Red Lobster. I was put on funding my 2nd year. Our funding package covered tuition and paid us $10,000 per year. We were paid for 9 months and expected to save to cover our unfunded summers, unless you were one of the lucky 3 people who got summer funding (always senior students and frequently the same 3-5 students). With that 10k per year (which rose to 14k by my 5th year), we were to cover all our expenses that weren't tuition. We were not supposed to work more than 10/hrs per week in an outside job per the conditions of our TA position.  I finished graduate school with a combined undergrad/grad debt of $110,000.

Now, because I had no support for undergrad, that means I came to grad school not only with student loans but also with other debt. Because my first year was unfunded, I also took on more debt. I had to pay for all of my own expenses from the time I graduated from high school. That means that I started accumulating debt from the moment I started college. And I never stopped. Because debt always creates more debt. And because I do not have any inherited wealth and had no family support, as a first gen student, I started off in debt and will likely continue in debt until I die and if the loans are not paid off then, they will try to extract it from my spouse or child. I went to only state schools and either didn't have a car or drove variously a stripped down toyota truck or a ford festiva because neither San Diego not Columbus have ever had very robust public transportation options. I lived at times with as many as 4 other people to try to keep expenses low. But school and living costs only increased as the years went on.

When I got my first job out of grad school, it paid $42,000/year to live in Washington DC. I had $110,000 in student loan debt. And DC was expensive. My then servicer suggested I consolidate my loans to help keep the payments down and then used an extended payment plan for high debt. There were no income contingent payment plans in 2003, so this was the best thing to do. Otherwise, $800/month of my $3000/month income would have gone to student loans and I would not have been able to pay anything else really. Not in DC.  Instead I paid $500. My rent was $2000.

But, here is the part that is important: when my student loans were consolidated, they were moved to a new type of loan and in the computer system, it looks like my Direct Federal Student Loans taken out from 1993-2003 were paid off. Because that is how consolidation works -- the company that takes on the loan, buys it from the lender. So, my 10 years of different loans now looked like 1 single loan taken out in 2003.

In 2007, the government initiated the PSLF program.  I was a professor and so my employment qualified me. But they only counted any employment that started after 2007 and no loan payment before 2007 would count. So, basically, in 2007, the clock started. In 2009, I applied for the income based repayment plan that also started around 2007. It cut my monthly payments in half. But, my servicer's website advised that we apply for the program only when we became eligible for forgiveness, i.e. after 10 years. The website also did not explain that even if you took out Direct Federal Student Loans, once you consolidated those loans, they no longer qualified for the program.

It was, of course, to the servicer's benefit, not mine, to have my loans consolidated that way and it was the loan industry that lobbied hard to limit the loan forgiveness program to only Direct Federal Loans. That meant that all the loans they had consolidated away from that program to their own programs would NOT qualify. And, even though thousands of us had originally taken out Direct loans, our debt could not be discharged under the new program even when we had both qualifying employment and had been paying them regularly and without default or forbearance for over a decade already.

So, in 2014, I initiated a reconsolidation of my loans to return them to the Direct Federal Student Loan program so that I could qualify for the PSLF program. But every reconsolidation wipes out the previous payments. I had, at this point, never missed a payment since 2003 and had even been in the qualifying payment types and in a qualifying job since the beginning of PSFL, but the clock started ALL OVER in 2015 when my loans were move BACK into the Direct Federal Loan program. If you go into my loans right now, it says that the loans were initiated in 2015 and I now only have 78 qualifying payment. I still owe $50,780 in 2021 and still have until 2025 until I qualify for PSLF (if we still have the program and the then administration actually follows through).

So, to recap, I took out my original loans from the direct federal program between 1993-2003. I have not missed a single payment over that time and have paid off $60,000 of the loans plus about $30,000 in interest. Because, of course, when your loan payments string out over 20 years, even at 3% interest, that is tens of thousand of dollars. My own child will be starting college in 2024 and I have almost no accumulated savings to cover those costs. Because how can you save when you have spent 20 years paying 25% of your monthly income to student loans?  My own child's college choices will be limited because I have student loan debt. And I have student loan debt because I had no parental support to go to college.

This is how generational debt is perpetuated. This is why social mobility in America is a lie. The entire student loan structure is about getting people into debt with promises of a better life and then keeping them in debt to transfer any wealth we may accumulate in that "better life" to the banks and other already wealthy classes. And then when the debt reaches crisis proportions for masses of people, they turn it around and say "oh, but you don't deserve loan forgiveness because you were irresponsible." No, my friends. I and people like me have been very responsible and have been diligently working to pay for everything. The system is just designed to make that as difficult as possible. We deserve to have our loans forgiven because we have more than already paid them off!  The system has been changed over and over again, however, to make it so that never happens. Or only happens after lenders have milked as much EXTRA from us as they can get away with.

If we stopped owing money, then how would rich companies and people stay rich? How would they ensure that any wealth that might accumulate to the lower and middle classes would trickle up to them? Because THAT is the legacy of trickle down economics -- almost all the money has transferred upwards and student loan debt has been one of the tools in the capitalist toolkit to ensure it keeps doing so.

PS. If you want to know why only 78 of my 80 payments qualify? When I was transferring from the income based repayment plan back to the standard plan, the loan servicer took out two withdrawals in the same month. So, according to the system, their servicing error looks instead like I made an extra payment which means that both of those payments they took out do not qualify as "qualifying payments". Their banking error, my penalty.

EDIT TO ADD THE HAPPY ENDING TO THIS STORY:

One month after writing this blog post, I received the email telling me that under the temporary expansion of what count as eligible payments, my loans have been forgiven. 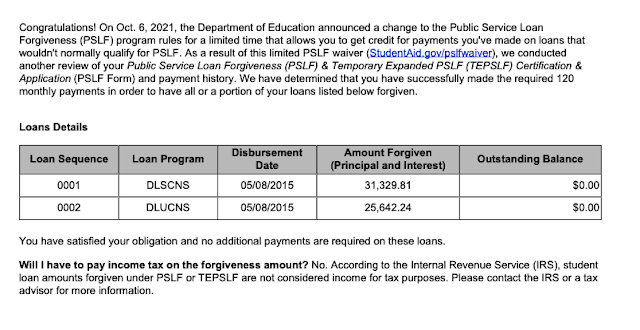 SECOND EDIT:   I got a refund for 9 overpayments on my loan (at $809.74 each). Had there not been a payment moratorium during COVID, I would have gotten all of those payments back as well. Because I ended up overpaying by years for the program. But they are now working to make things right for us.
CANCEL STUDENT DEBT! ALL OF IT.