Impacts of Teaching Race and Ethnicity in the Classical World 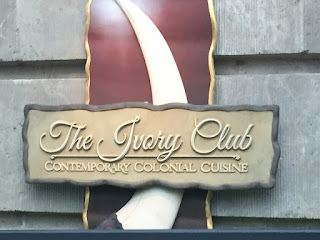 One of the questions we ask ourselves whenever we rethink our teaching or, as has been an explicit part of the conversations around teaching race/ethnicity or gender/sexuality in antiquity, when we introduce new approaches to old material is what is the impact. This semester, I made explicit in my Ancient Identities class what I'd always interlaced implicitly--I incorporated current events and conversations directly in the reading and as part of the requirements for students' final projects. I wanted to share some of the results/impacts. I'll start first with providing comments from student course evaluations and then list the names (with some description) of student final projects. Excluded from the evals is the normal "Prof. Kennedy sometimes overestimates the amount of reading we can do..." Of course I do. We all do. It's how you know we are professors.

"After taking this course, I now have an interest in understanding how Greeks and Romans constructed their identity by analyzing and comparing their identity with others. Most importantly, I am now curious to see how people's interpretations of ancient texts influence modern events...The instructor was fun to learn from. She challenged my thinking and pushed me to be more analytical in my understanding of the readings. But beyond that, she encouraged me to think more in the abstract, which is something that is not often encouraged in many courses."

"You really pushed me outside of my comfort zone and got me to think about concepts in a new way which I really appreciate. I really learned so much in your class and I also struggled a lot but that is always a good part of learning."

"This course is an excellent one for dismantling assumptions. There are so many implicit assumptions about the ancient world present in modern society for which there is NO evidence in classical sources. This course was incredibly challenging, as we could not take any prior knowledge of the classical world for granted. I also liked the structure, starting with the theories of antiquity and then moving to evaluating evidence using those theories."

"I knew nothing about the class so I was skeptical but I was also really curious to take it...I feel like I have a whole new perspective on the subject and I am very glad I took this class."

"I was very interested in the time period but never really thought of the identity and race aspect of the time period...There were many tough questions asked, a lot of questions that really had no specific answer, which challenged you to really think about things ."

"I wasn't sure what the identities part of class would be but as a classics student I was already excited for the course...this course made me think very differently about the ancient world."

"It is really intriguing to consider the construction of race, but it is also discouraging to see all the biased/racist constructs in modern America that I feel like I have power to change...Our readings also sometimes required us to analyze issues I have not put much thought into...The diversity of reading material was great. It kept it more interesting when switching between ancient and modern texts. Class discussion was good...It would be interesting to have a segment of the class be about actions taken in the ancient world and modern world against racism. This would pair nicely when reading all of the depressing articles at the end of the semester and leave us more encouraged and driven to do something with the knowledge we have gained in this course."

"This class covered a lot of difficult topics and pushed my ability to think critically and push myself to think of topics in more than one light."

I am not including links to the project blog as I have now made their assignments private for FERPA reasons, but, here is the description of the assignment:

"The final project for this class is a hybrid creative/research project that asks students to look comparatively at the ancient and modern worlds by using ancient ideas about racial/ethnic identity to think through a contemporary debate/problem/etc.  For the project, students are asked to write an 1000-1500 word essay that includes citations to both our ancient readings and modern news/scholarship/texts/videos/etc."

Students picked their own topics, linked to current and recent media about the topic and used our ancient sources to think about the issue. I was (mostly) very impressed.

Pax Americana: How American Nationalism Rewrote the History of Rome
Cultural Theories in The Phantom Menace (an oldie, but a goodie)
Connections between ancient and modern Jews
How Has Ethnocentrism Transitioned Through Antiquity Into Modern Times?--on accepting refugees
Standing Rock and Roman Civilization
Decentralization: Greek Civilization, Athenian Democracy, and Bitcoin
The Next Step in the Evolution of Eugenics--from SParta and Plato to the Holocaust to  CRISPR cas9
Romans and Americans: Who are we to judge?--nation of immigrants, melting pots, and white supremacy
A Heritage or an Identity?--on Confederate monuments
Why are Native Americans still using blood quantum to determine tribal membership?--on the racist origins of blood quantum
Anti-Russian Propaganda--Use of Classical imagery during the Cold War
Immigration in the US, Athens, and Rome
Language and Identity: Russia and the Crimean Crisis
From Airs, Waters, and Places to Water, Lead, and Identity: An Analysis of the Fragile Human
ego to Control the Environment
Refugee Crises as a Threat to National Identity--are they?
Pocahontas Battling the White Man--Disney meets Herodotus
A Dichotomy: Being “white” on the census vs. being “white” in America
Seriously, Does Cultural Appropriation Exist?
The Film Industry Addressing Ancient Issues--Scottish stereotypes in Trainspotting
Rethinking Opportunity--on disability and the American Dream
Coerced birth control injections by the Israeli government: the continuation of an ancient stance
against heterogeneity
Since When Did Diversity Look So Dim?--asking why affirmative action exists and exploring whether it works as it should