The "Typical" Family in Roman Britain

There has been a lot of chatter about the BCC Roman Britain cartoon still flitting around, mostly because Taleb seems set on personally attacking anyone who disagrees with him or questions his data. It's not the most productive way to discuss the issue of diversity in Roman Britain (or the classical world, generally). But one thing has not seemed to come up and I am puzzled by it--one of the primary bones of contention is on the "typical" nature of the family represented in the cartoon. Even those who have agreed that the evidence had difficulty accepting the word "typical" (though, see now Prof. Tim Whitmarsh for a different take).

Perhaps the reason this difficulty arose was because they assumed that the "typical" referred to the skin color of the characters. Actually, the skin color is irrelevant to the "typicality" of the family. Regardless of what type of Roman this family was ethnically--Italian, Syrian, Egyptian, Algerian, Greek, Gallic, etc--their activities and lifestyle would be the same--the way they lived their lives would be TYPICAL of a Roman family living in Roman Britain. That was the point of the BBC cartoon, not the skin colors of the Romans.

Why is it, then, that most of the commentary and controversy surrounded skin color? In part, because of the assumption that all Romans were actually ethnically Roman (or, at the least, Latin or Italian). But that was not the case a early as the 1st century BCE. Pick a well-known Roman author of the Late Republic or the Empire and you would be hard pressed to find an ethnic "Roman". Cicero? Nope. Catullus? Nope. Vergil? Nope. How about Caesar? Yes. Caesar. And Caesar himself made a bunch of Gauls "Roman," putting them in the Senate and in the ranks of the military. So, as early as the 1st century BCE, you could not even equate Rome with being Latin or Italian. Of course, all of these non-Roman Romans are still counted by us today as "white," but they weren't white by their own estimation (that's for women, lepers, and, maybe, Scythians) nor were they "white" until sometime around World War 2. So, assumptions in the general public about who does and doesn't count as a "typical" Roman are frequently mistaken.

The focus on their skin color is misplaced and shows our own preoccupations, not ancient ones. That a Roman family that had a sub-Saharan African father raises so much of a ruckus is our problem. This family was still "typical" in that is was Roman and participated in the life that being Roman in Roman Britain entailed as opposed to living the life of a non-Roman Celt. Those who focused on the skin color of the characters lost that typicality, assuming anachronism that was a projection of their own modern racial bias.

Anachronisms abound in the critiques defending Beard as well, however. For example, Massimo Pugliucci writes:


As a side note, I did find the BBC video just slightly too informed by modern sensibilities, as for instance in the scene, at 1'50", where a Patrician girl expresses the desire to one day become a military commander, only to be rebuked by her mother who explains that women are not allowed in the Roman military.

Actually, we have ample evidence that young girls and women chafed against restrictions placed on them and that warrior women or fighting women were a thing--from female warrior gods (Roma and Minerva!) to Amazons and Boudica and female gladiators, the idea that a young Roman girl--Patrician or not--wouldn't have any aspiration to be like her father or be in the military is, again, a projection of contemporary concerns. Especially in a place where the tales of Boudica leading her army against Rome would have been well-known, why would a girl raised by a soldier dream also of being a soldier? Gender is a social construct that needs to be developed and reinforced. Children are socialized into what are and aren't acceptable behaviors. That her mother told her no is socializing the girl into the historically accurate behavior--no Roman mother would say "you can be whatever you want!" That would have been an anachronism worthy of comment.

Hopefully, at this point, we can see that this debate reveals more about our own biases than anything about ancient Rome. It isn't the inclusion of a black father, but the assumption that there couldn't be one. But, skin color didn't make one Roman, it was citizenship and cultural practices. 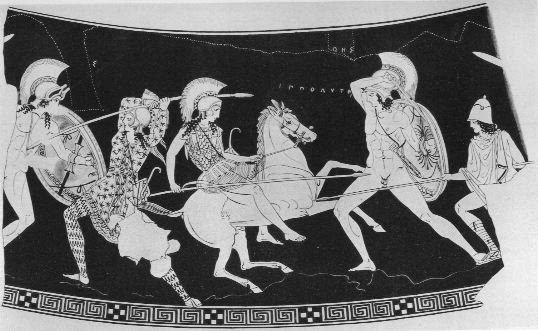