Clearly, I got behind on the photo journaling since it has been a few days since the last post. The number of photos in need of organization is overwhelming. We went to the Kerameikos, the Acropolis Museum (no pictures allowed), the Epigraphy Museum and National Archaeological Museum. Then we travelled home and have been recovering. So far, I have labeled and organized everything up to the Kerameikos and haven't even downloaded the epigraphy and archaeological museum images. But here are some shots from the Kerameikos. I really love that place and I got a wee bit out of hand with the grave stele shots. It is one of the locations, however, where imagining what it must have looked like leaves me awed.

The Kerameikos was the major cemetery for Athens and sat just outside the city walls near the Diplyion gate. It is also where the Sacred Way (the road to Eleusis) began. There also was the Pompeion, where the procession to Eleusis for the Eleusinian Mysteries and the Panathenaic procession to the Acropolis originated. Remains of the Themistoclean wall run through the site (the one rapidly put together after the Persian invasion of 479 BCE with anything they could find, including column pieces, statue fragments, etc.) and then there is the Street of the Tombs. The Street of Tombs was a road into the city lined with spectacular grave monuments. In situ are replicas of some of the original tombs while the originals are housed in the museum on site. It must have been a bit creepy and a bit awe-inspiring to enter the city through the tombs. 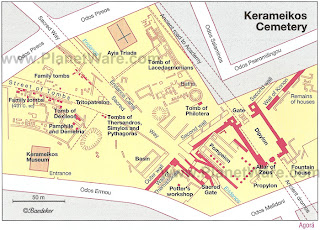 Map of the Kerameikos stolen from another website (PlanetWare.com). 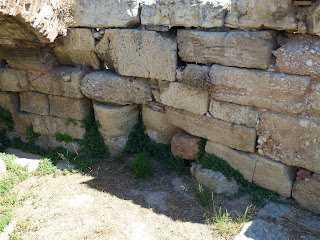 A portion of the Themistoclean Wall. 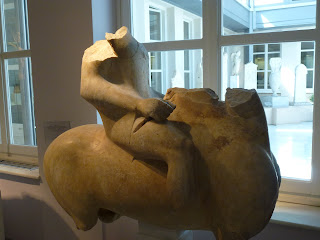 Archaic grave monument destroyed by the Persians found in the Themistoclean Wall. 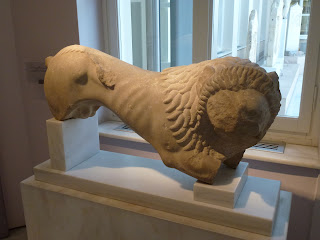 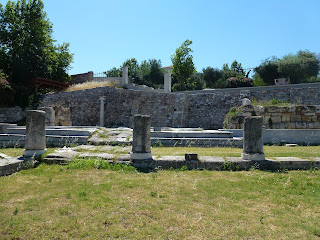 The Propylon and portions of the Pompeion of Hadrian (the closer columns) and the earlier Pompeion. 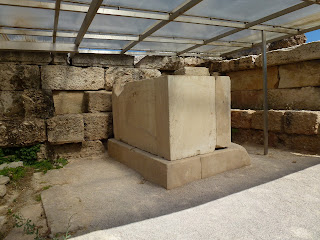 Altar found along the Sacred Way just outside the walls. 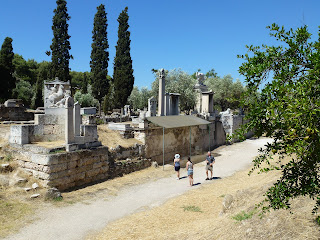 The Street of Tombs. 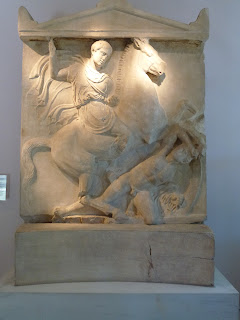 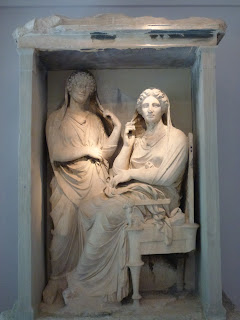 Stele of Pamphila and Demetria. 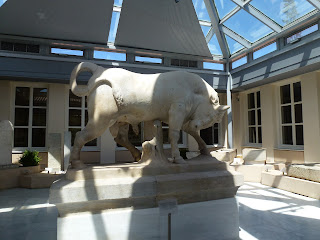 Bull that sat atop the tomb of Dionysos of Kollytos. 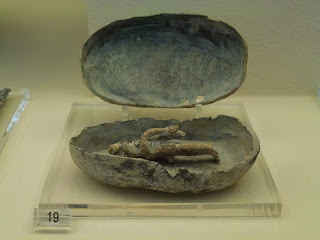 Curse "tomb" made of lead and inscribed with names followed by "and anyone else who ever is a fellow-accused or witness in favor of them". Buried in the enclosure of Aristion between 420-410 BCE.

There you have some highlights from the Kerameikos trip. Surely you don't want to see the dozens of grave markers I took pictures of. There are so many. One was identifiably a metic husband and wife, which was very cool for my research so I'll show you, though the statues or lekythoi that stood atop it are no longer there. 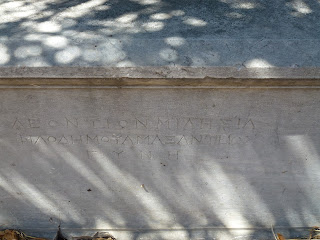